This trip may never have happened, save for my usually super reliable, 4Runner’s decision to start spewing power steering fluid yesterday morning – just as I was gearing up for a solo trip under what looked to be the only good weather-day of the weekend. With 403,000 km on the old beast, I can hardly blame it for a cracked hose and only the third leak I can ever remember it having. After discovering that Toyota needed $95 and 5 days to get me the part, I headed down to the local automotive parts store and for $6, bought a length of transmission cooler hose and a couple of clamps. Problem solved! Well, not quite. It still took me another couple of hours to bleed the air out of the system and clean up all of the kitty litter that I had dumped on my driveway to soak things up. Salvaging my trip was definitely out of the question.

As is often the case, what looks to be disappointment can turn into something better – and in this instance, way, WAY BETTER than what I had been planning for on my solo trip. With Brad confirming that he was free for a trip, but SpotWx calling for heavy rain developing between 3 and 4 pm, we decided on an early start to take advantage of the forecast. The only question was where?

While writing last week’s post describing my third trip to the summit of Prairie Bluff, I was struck by my noticeable gap in experience on Pincher Ridge – and believe me, if you’ve ever seen me smile, you know that I’m an expert on large gaps 😂. Though I’d enjoyed a fun ascent via a gully on the northern outlier in 2013, I had never been to the Centre Peak or the South Peak. Even worse, I’d never been to, but have repeatedly stated without action, that I needed to one day get to Victoria Ridge – which is a ‘must visit’ peak for people who love the Castle. Therefore, if Brad was game and the weather held, we were going to try Andrew’s thrice-tested route up the south ridge of Pincher Ridge, and as a bonus, satisfy some guilt by tagging the Centre Peak. As fate would have it, Brad also had unfinished business on Pincher Ridge, and so the decision was made.

What took place was one of those remarkable days that you think about for years afterwards. Perhaps motivated by the sketchy forecast, or in Brad’s case, a long suffering wait for an early morning A & W breakfast sandwich – whatever the reason, we found ourselves tagging the summit of Pincher Ridge in just 2.5 hours. With time and weather to spare, we then headed on to tag the Centre Peak, completing the hike and quick scramble in just 40 minutes.

Here is where we then looked at the time and the ever-improving weather before making the decision to carry on to the South Peak. Why not? We would regret it if we didn’t – at least that’s what we kept saying. After a little over an hour of hiking, we were soon standing on the expansive summit of the South Peak under clear blue skies with Victoria Ridge teasing us to continue.  Why not? We would regret it if we didn’t – and so we did – and 55 minutes later we were standing on one of the gems of the Castle, enjoying panoramic views under a clear blue sky and near-windless conditions – just as Spotwx had predicted. Our unintended mission was half complete and my guilt was absolved.

The only trick now, was to get back before the forecasted thunderstorms rolled in. Not wanting to drop into the snow-covered valley beneath Victoria Ridge for fear of encountering a post-holing nightmare, we decided to venture back to Centre Peak and descend from there. To save time, we bypassed the South Peak and made it to the col with the Centre Peak just in time to hear the first clap of thunder. By the time we hit the tree line, ominous clouds had filled the sky accompanied by the near-constant rumble of thunder. Thankfully, Prospero did not conjure the worst of his tempest until we were on our bikes and could make the remaining ~3.2 km journey back to our vehicles in short order.

I know many others have completed this traverse, and for me, it was long overdue. That it unfolded so unexpectedly and so perfectly, made this into a remarkable and memorable day.

To get to Pincher Ridge via the south ridge, drive ~19.5 km south from Pincher Creek on Highway 6 until you reach the Shell Waterton Complex Road (Township Rd. 43A).  Turn onto it and drive west for ~9.1 km until you come to a junction with a gravel road near to the entrance of the plant.  Turn left and onto the gravel road and continue for ~3.9 km until you reach Butcher Lake.  Turn left and onto another gravel road immediately prior to the Lake and follow this road for ~1.4 km until you come to a junction where you can either turn left or keep going straight. Keep going straight for another ~610 m and you will arrive at a locked gate and a parking area. This is the trailhead for North Drywood Falls and the starting point.

Following Andrew’s directions, we rode our bikes for ~3.2 km until we came to a drainage coming off the south side of Pincher Ridge. We then hiked up the right side of the drainage to check out the waterfall he describes. We continued past the waterfall, along the base of the south ridge until we came to an obvious weakness in the cliffs (from the ridge, it looks like there could be more than one to choose from). We then scrambled up and onto the south ridge. The next ~700 m provided a few more options for scrambling should we so choose, or just a hike. The total elevation gain from the trail to the summit was ~770 m.

If it had been the summer, I suspect that we would’ve descended into the valley beneath Victoria Ridge and followed the trail back. However, from the ridge, it looked like there was still too much snow to chance it. Instead, we returned to the southwest base of the Centre Peak and descended to the trail from there.

Our total roundtrip distance was 26.7 km with total elevation gains of 1747 m. Our total time came in at 10 hours even.

Gearing up at the trailhead for North Drywood Falls. I love early morning starts! 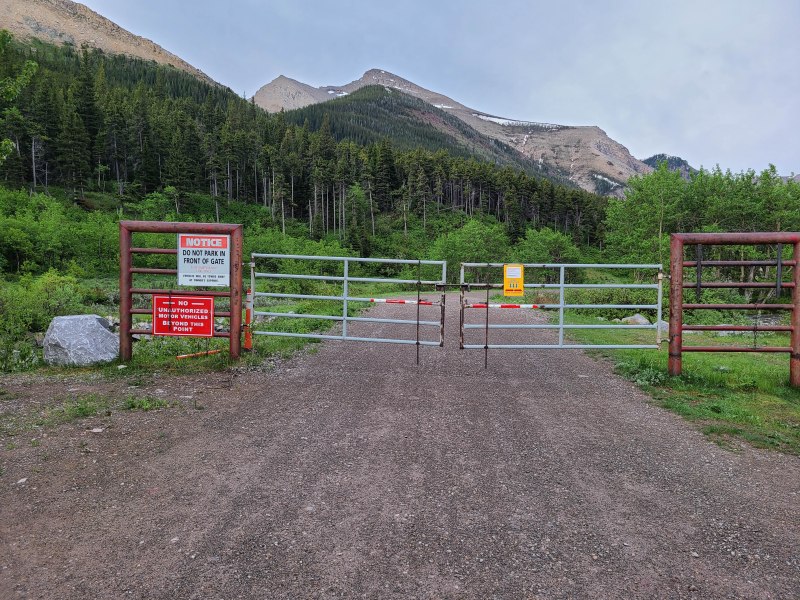 To get to the south ridge, hike or bike ~3.2 km past this gate and look for a drainage on your right.

One of Brad’s ice climbing haunts on Drywood Mountain.

It’s an easy bike or hike in and out. In the distance is the South Peak of Pincher Ridge.

Our quick ride brought us to the drainage (left) and a good view of the lower section of the south ridge. We would keep to climber’s right of the drainage.

Starting up after hiding our bikes in the trees.

Getting closer to the cool waterfall (top centre) where Andrew took his amazing pictures.

A taste of the colours to come.

Andrew was right! The waterfall is really beautiful.

Following the base of the cliffs past the waterfall while looking for a weakness onto the ridge.

The weakness we used is in front of Brad on the left, but I believe there are others to be found.

Brad starts up the lower section of the weakness.

The first section is steep but the rock is solid.

Doing my best, ‘Whack-A-Mole’ impersonation, I follow Brad up. (Photo by Brad Wolcott) 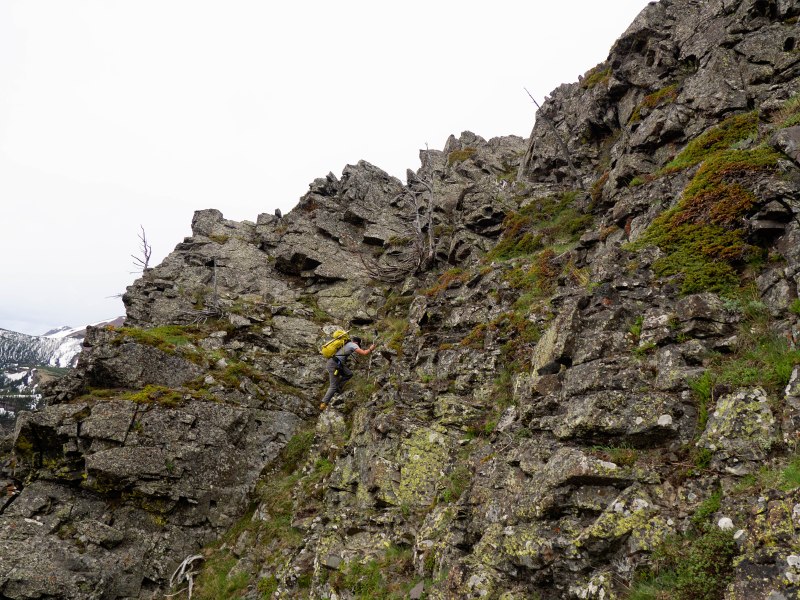 The next section is also steep and Brad will eventually use the rocks on his left to ascend.

Apparently, mountains are now into branding themselves! 😂 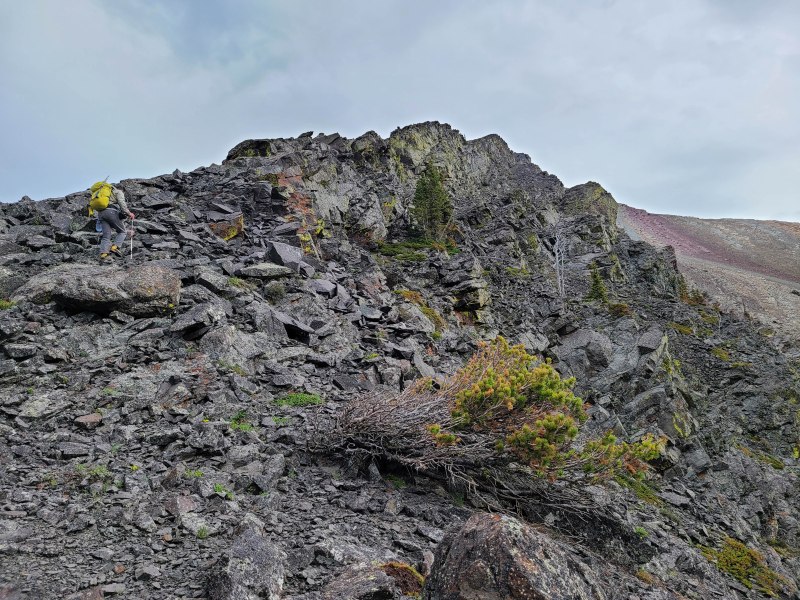 In several places, the ridge offers the chance to drop down from – and then reascend – the crest. 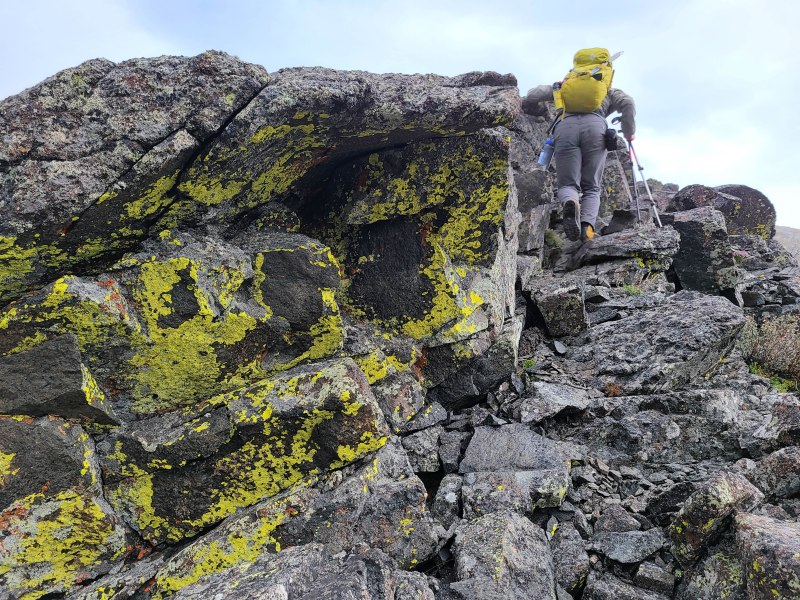 Some lichen brightens what began as a fairly dreary day.

Gazing across the valley to the Southwest Summit of Drywood. 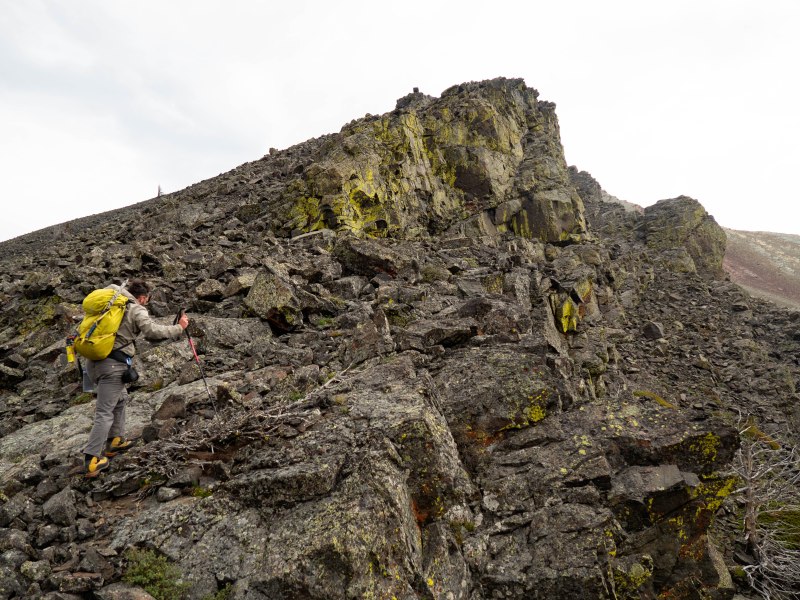 More colour and more chances to explore beneath the ridge.

While this old krummholz (the tree and not Brad 😉) was decidedly bent towards the northeast from a lifetime of prevailing winds, today the opposite was true, with a light wind coming at us out of the northeast.

Brad doing his best to blend in. 😏

And yet another lichen-bright section of rock. If I look at it closely, it kind of resembles the head of a T-Rex with the body behind… but that could just be me. 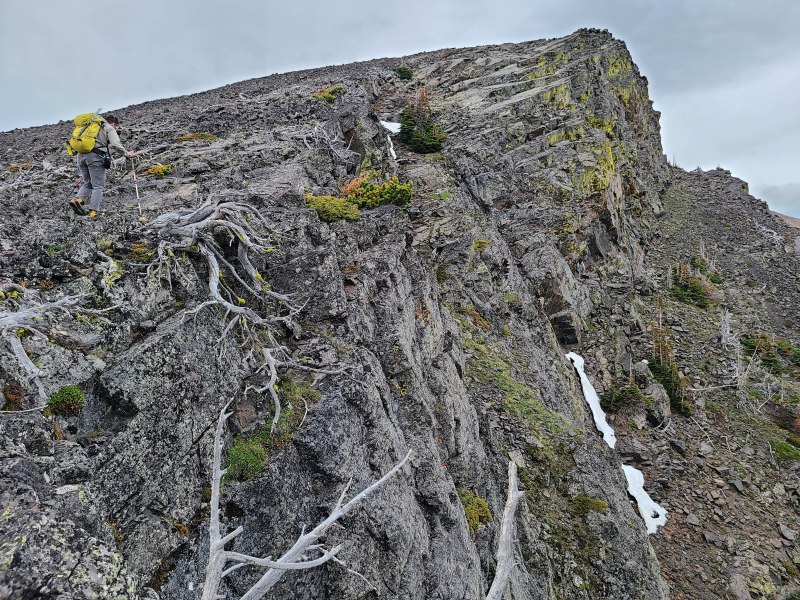 Once the opportunities for up and downs disappear, it’s a straight hike to the summit.

The view down to where we started up the drainage and across to Drywood Mountain.

A pano as we approach the summit… 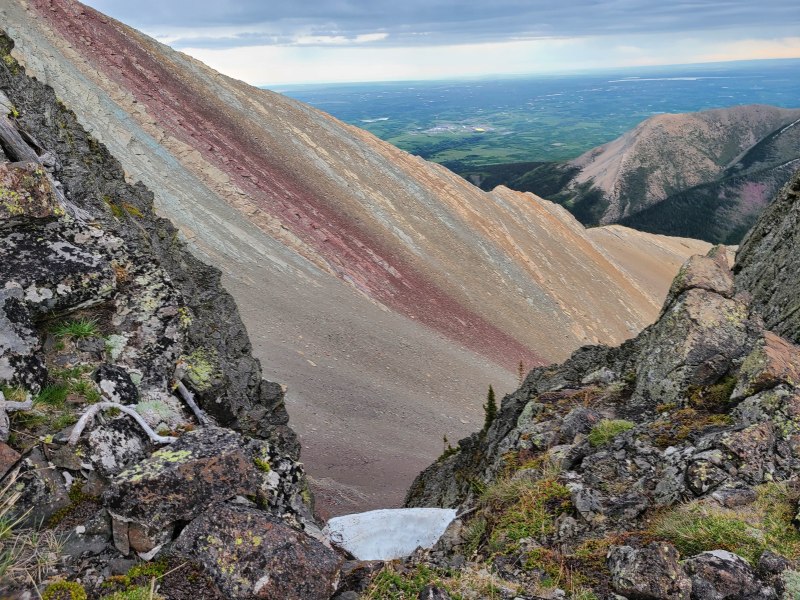 …and a closeup of the variety of colour.

Brad takes the last few steps before reaching the summit. 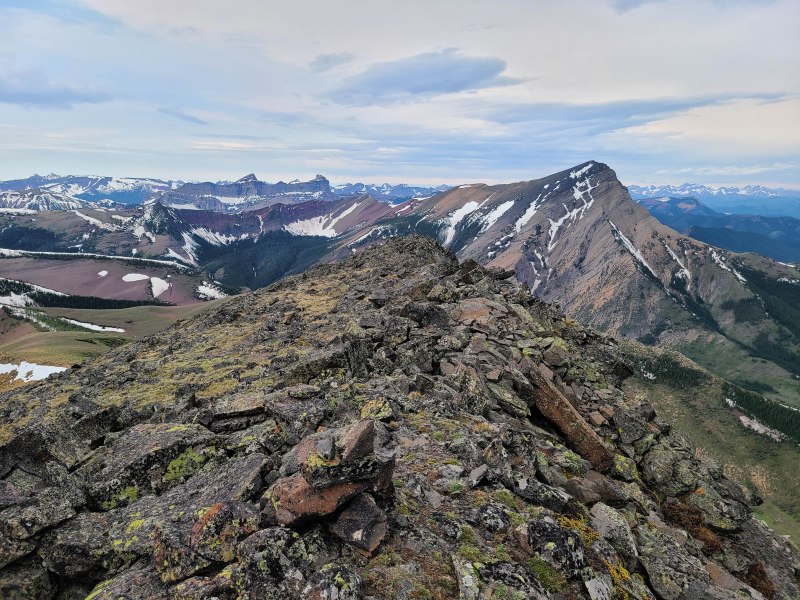 On the summit (2423 m) and looking west. I prefer Brad’s slight name change to “Pincher Peak” as opposed to Pincher Ridge for this summit, because while this is generally considered to be the true summit, the South Peak (which Brad renamed to “Bullseye Peak”) is actually higher. 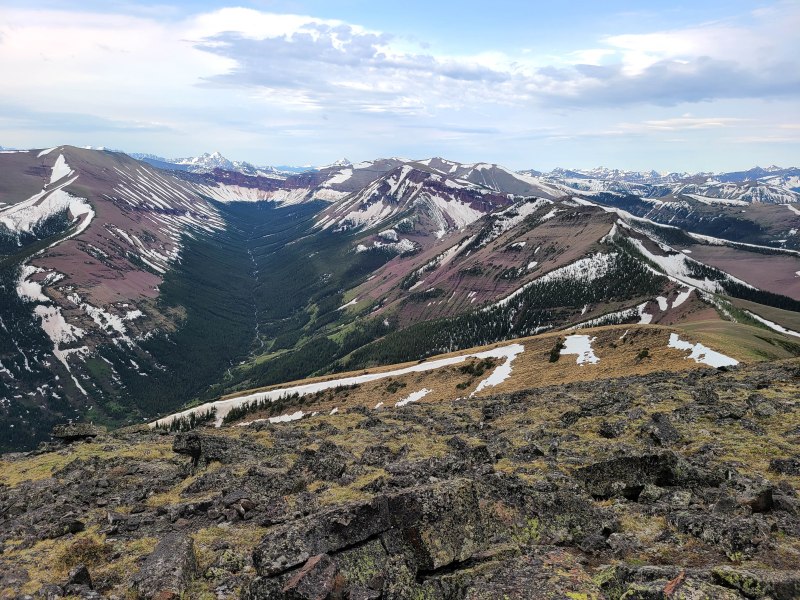 The view down the valley to the southwest.

Gazing to the southeast.

I venture a little further to the northeast to take in more views.  (Photo by Brad Wolcott)

My view back to Brad… 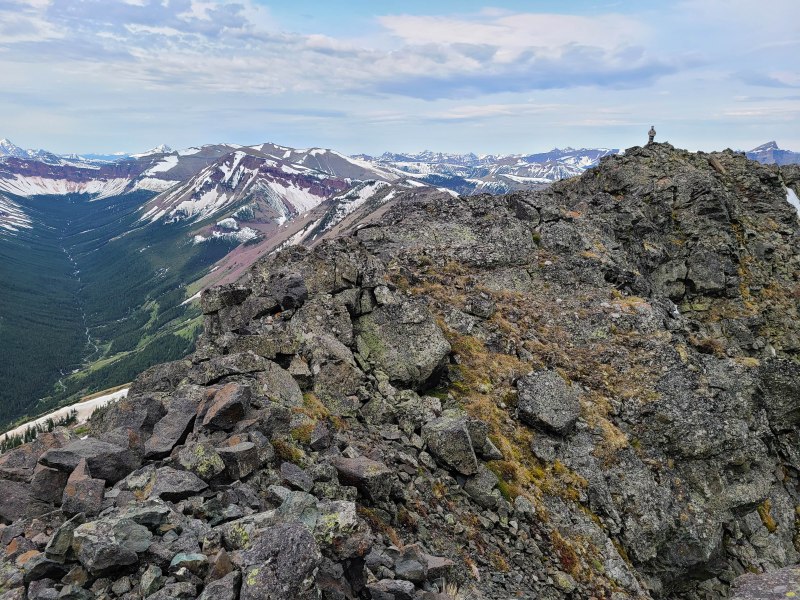 And with a different angle. 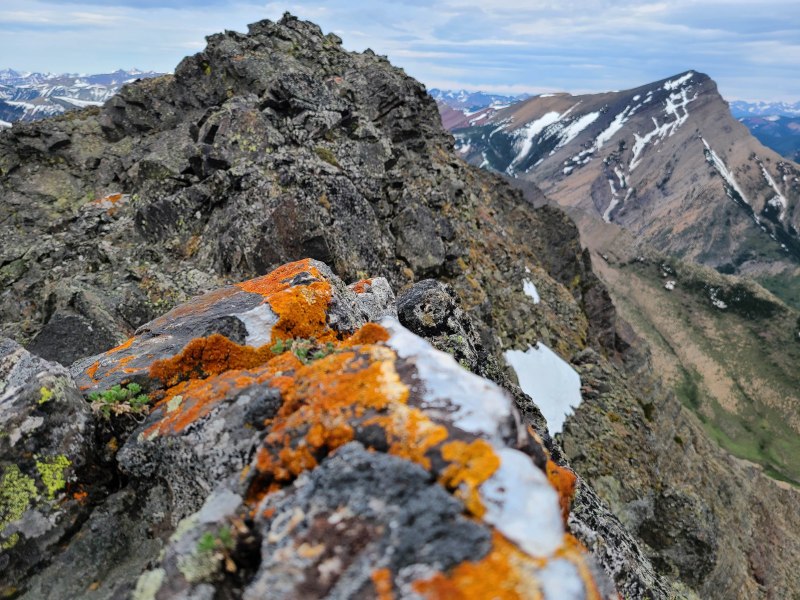 A cool vein of quartz surrounded by orange lichen.

The view down the northeast ridge. 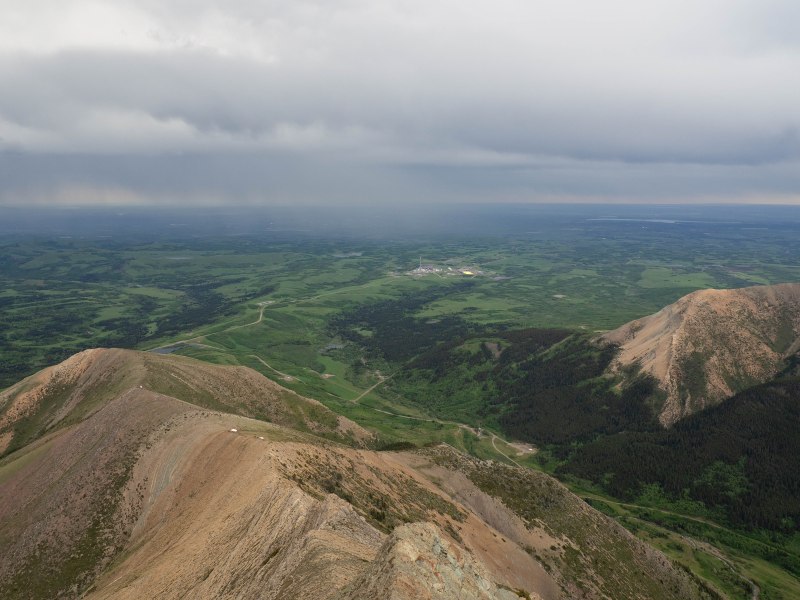 Rain falls close to the Waterton Gas Complex. That yellow pile of sulphur definitely stands out!

Looking across the valley at Drywood Mountain. 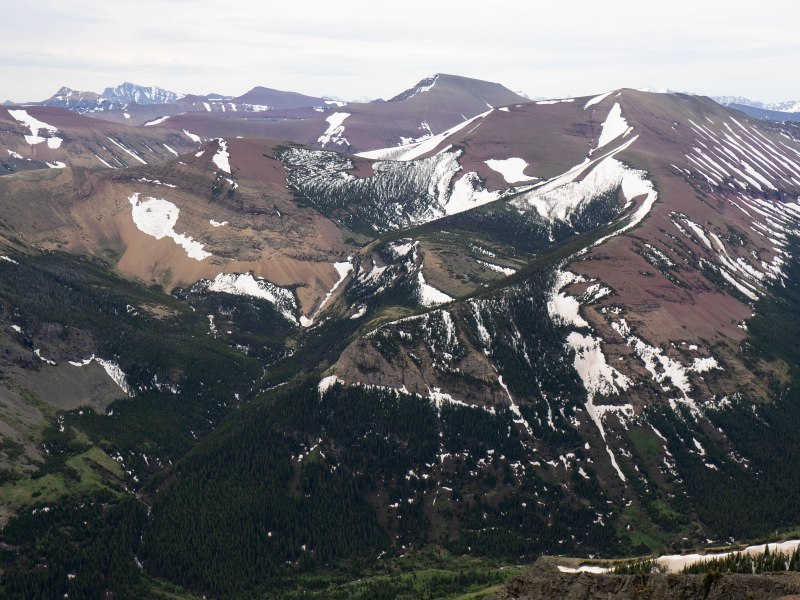 In the distance to the southwest sits Starvation Peak and King Edward Peak. 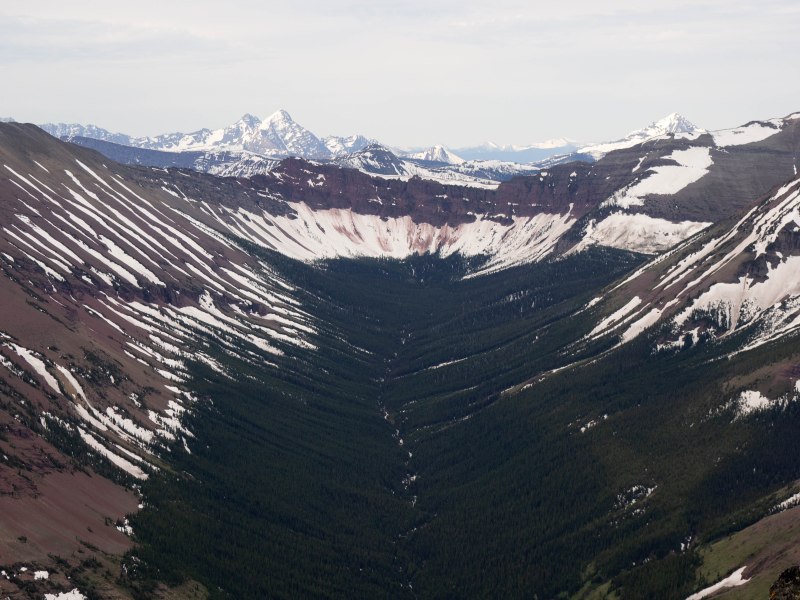 A telephoto of the previous picture also picks up Kenow Mountain on the right.

The view down Pincher Ridge shows our next three destinations for the day: the Centre Peak, the South Peak, and Victoria Ridge. 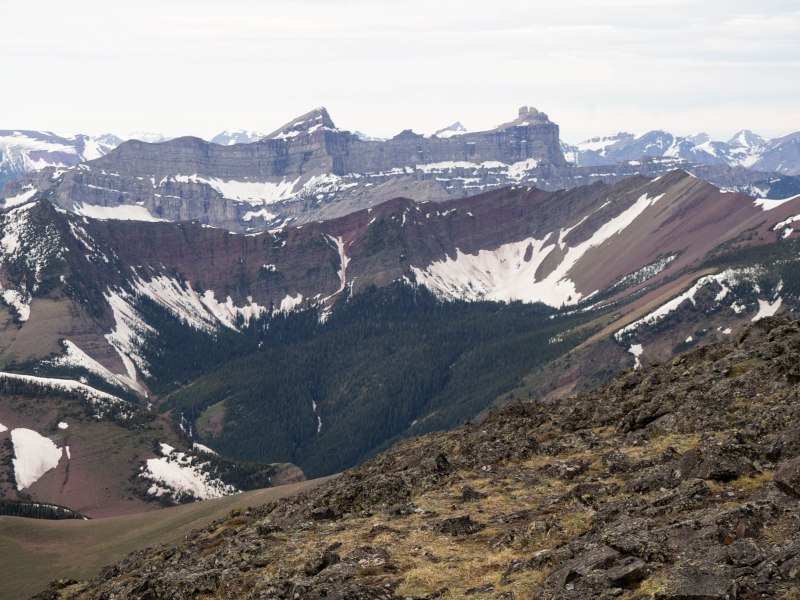 And last but definitely not least, Victoria Peak. 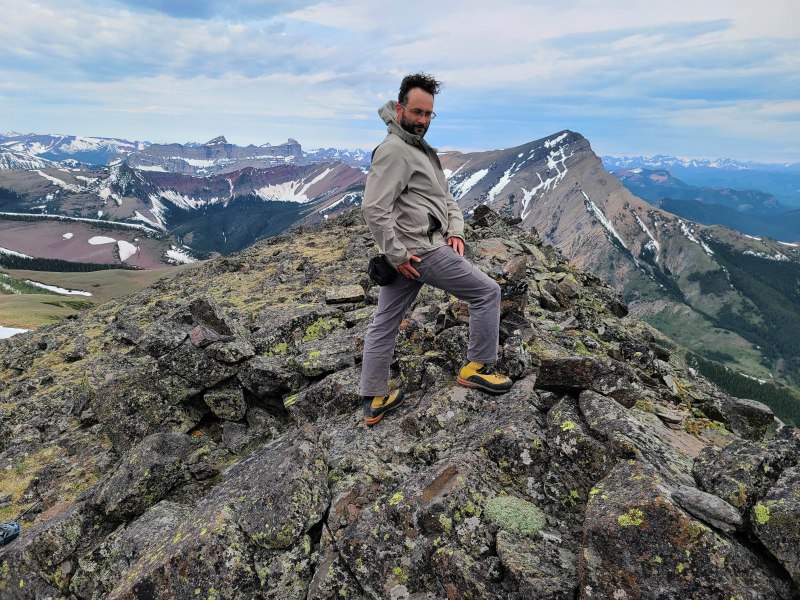 I’m seriously at a loss for words… 😳😭

My second time on the summit of Pincher Ridge – and one of my less awkward summit pics. (Photo by Brad ‘Hey my thumb didn’t get in the way!” Wolcott)

With the weather rapidly improving, it was no-brainer to make the ~2.2 km hike over to the Centre Peak of Pincher Ridge. Click to continue toward the Centre Peak.