Since this would be my daughter, Janelle’s first ever peak, I chose Coffin Mountain (also known as Mount Speke) because it had a direct approach and a shorter distance to the summit. It’s located at the very south end of Kananaskis Provincial Park on the Livingstone Range and is about a 30 minute drive from Thunder Mountain and the Oldman River ‘Gap’. My odometer pegged it at 199.4km from our house in Lethbridge and you can see it from Hwy 2 as you drive between Okotoks and Claresholm. It’s also possible to include Coffin in a multi-peak day. 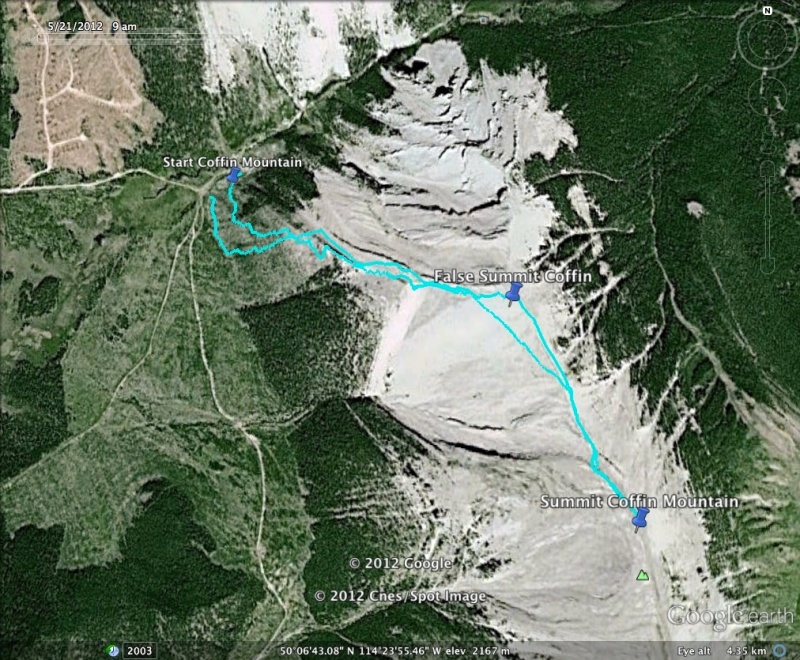 Our route to the summit and back follows the one outlined in Bob Spirko’s trip report.  It is called Coffin Mountain because it looks like a coffin when viewed from the east. Its outline on a topo map also resembles this. I believe the name Mount Speke comes from a mountain in Uganda that the famous Dr. Livingstone climbed. Unfortunately, we can’t claim to have climbed two mountains just because it has two names.  😉

This was a fairly short scramble that took us just 4 hours. It might be possible to summit it in just under 2 hours and descend in 1, but we took our time. My GPS said the summit was 2406m. 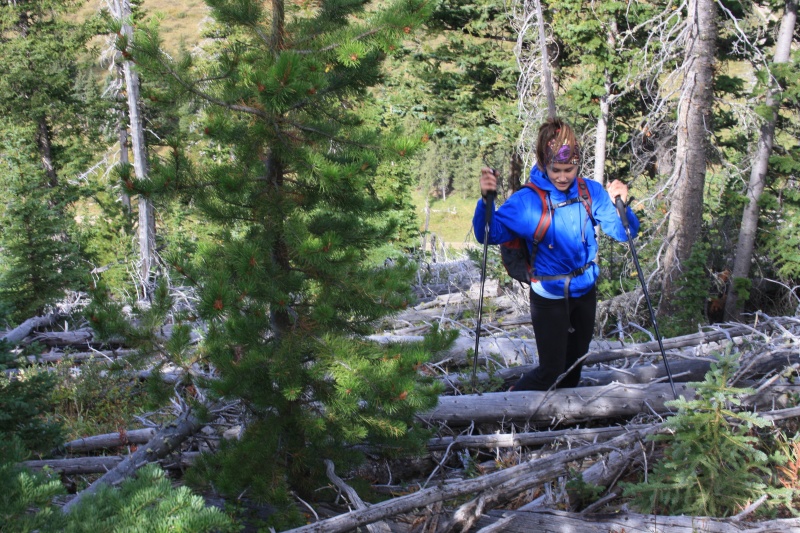 The first section of the mountain involves navigating through countless amounts of deadfall. At some point in the past, there was a forest fire that ravaged the slopes of Coffin which left large numbers of burned out trees.

Janelle works her way through the deadfall. Mount Livingstone is behind her. 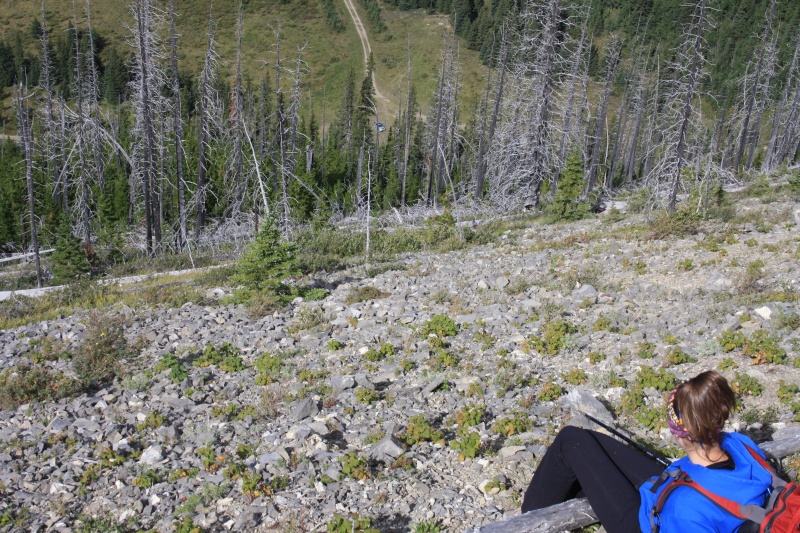 Looking down at our vehicle after finally getting past the logs.

Looking up to the first ridge that we had to gain. 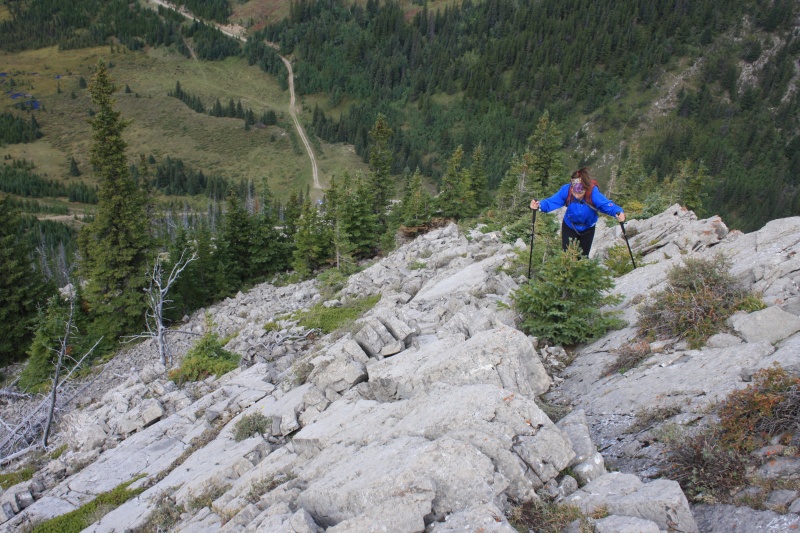 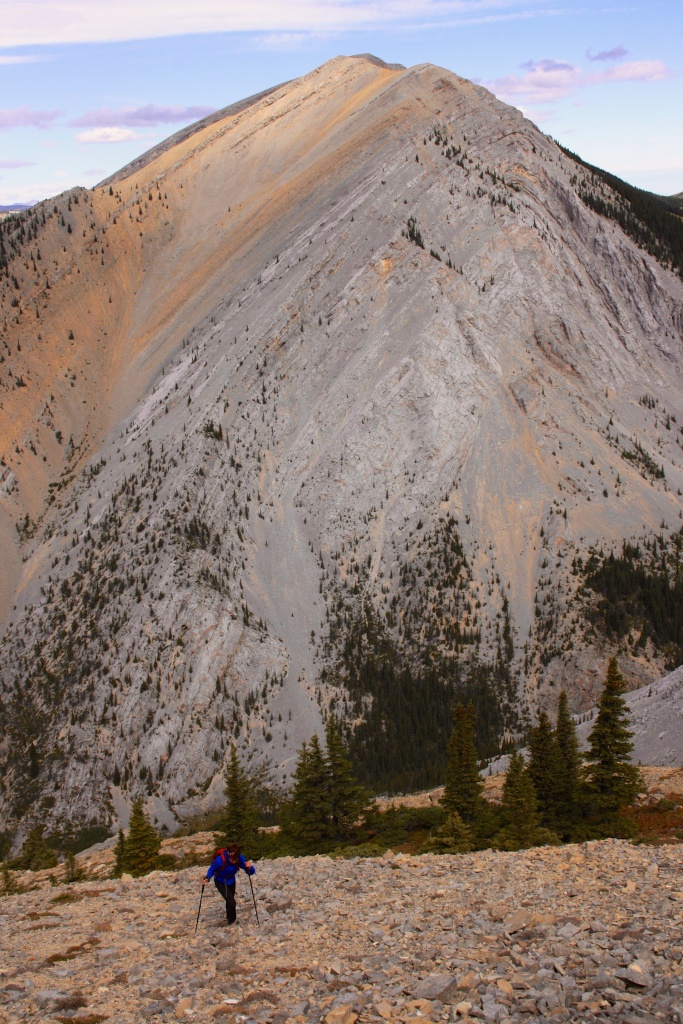 Once off the ridge, we began to hike up some scree. Colourful Mount Livingstone is in the background.

The false summit (left) and the summit finally appear.

Janelle on top of a rock outcropping.  This is where we took shelter from the wind and ate our lunch.

Janelle scrambles up toward the false summit.

We followed a gully that led almost to the top of the false summit. 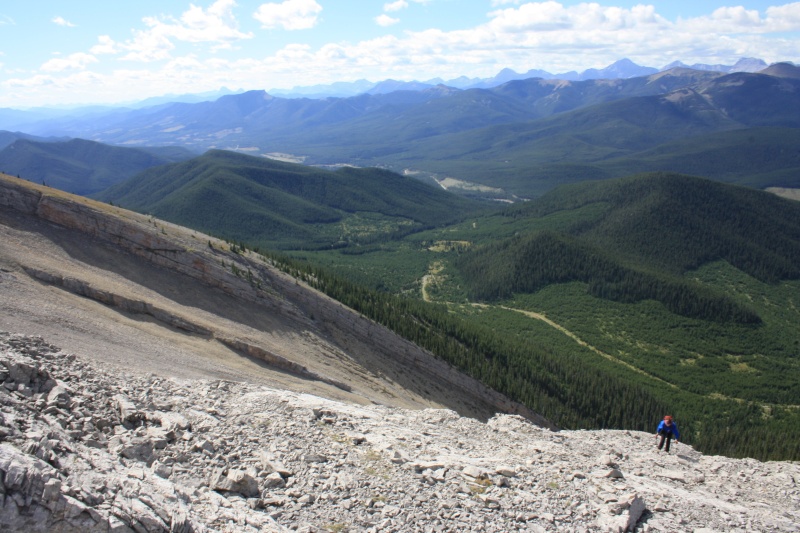 Janelle makes her way to the top of Coffin’s (Mt. Speke’s) false summit.

On our way to the summit. The false summit and Mount Livingstone are in the background. Plateau Mountain is in the far distance on the left. 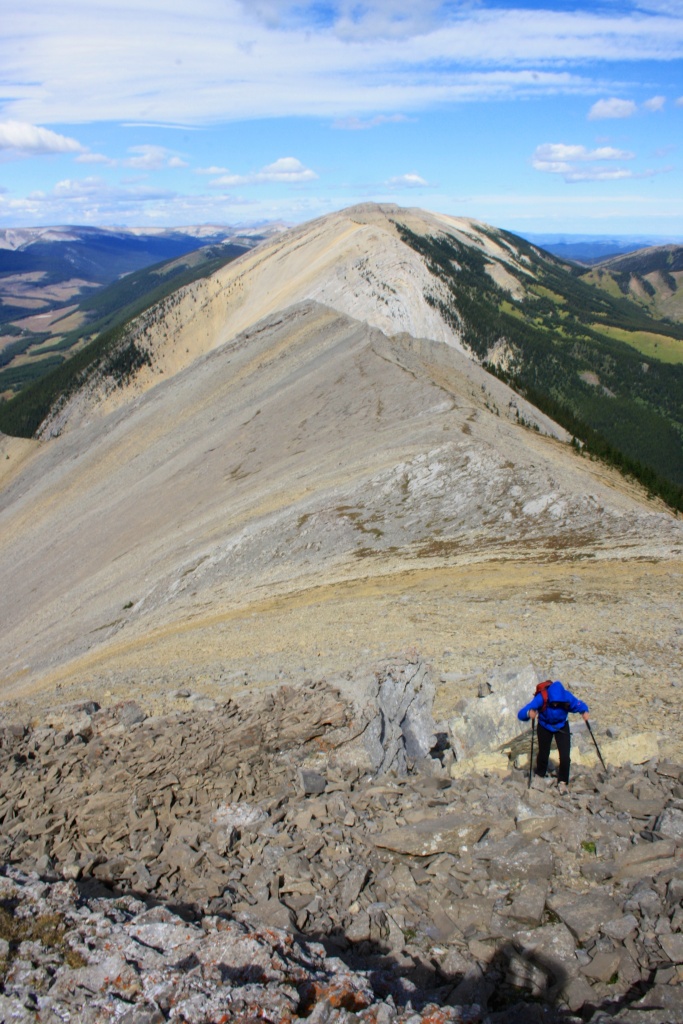 Janelle works her way up toward the summit along the colourful ridge. 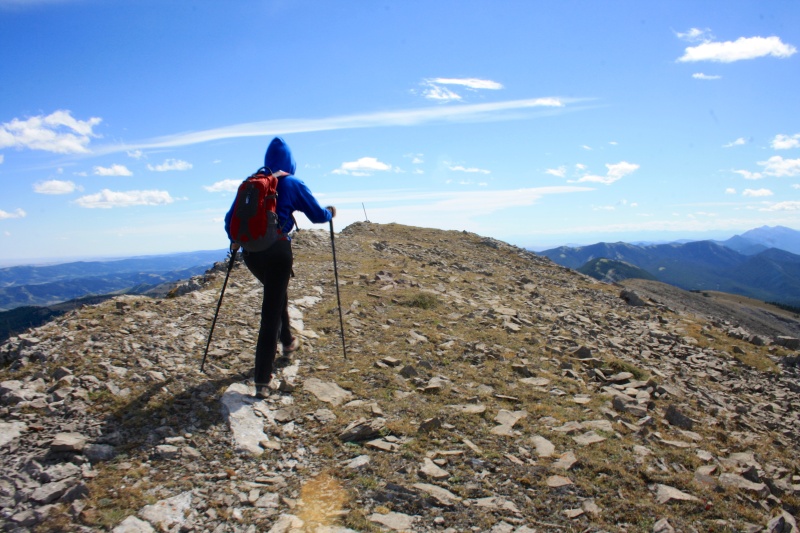 Looking north and east from the summit. Left to right: Mount Livingstone, Saddle Mountain, and Sheep Mountain. The towns of Claresholm, Stavely and Nanton are somewhere in the distance due east. You can see Coffin Mt. and Mt. Livingstone from most places along Highway 2 between Okotoks and Claresholm. 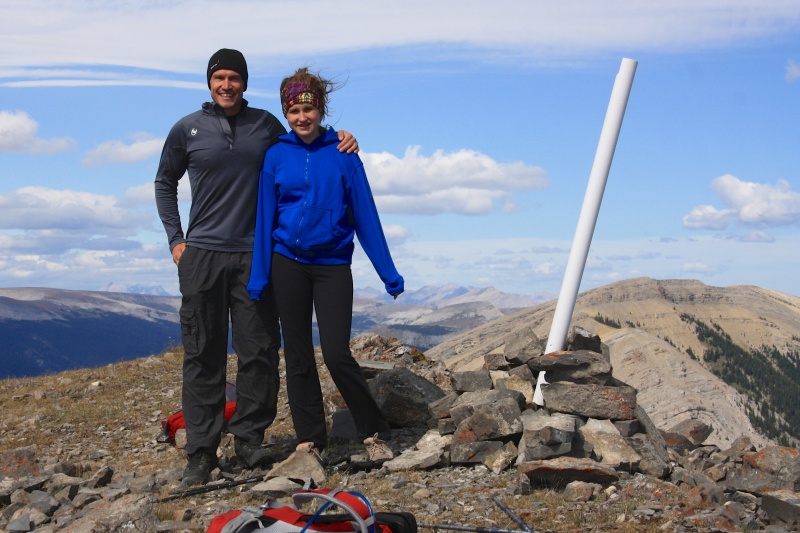 Janelle and I on the summit of Coffin Mountain (Mt. Speke). 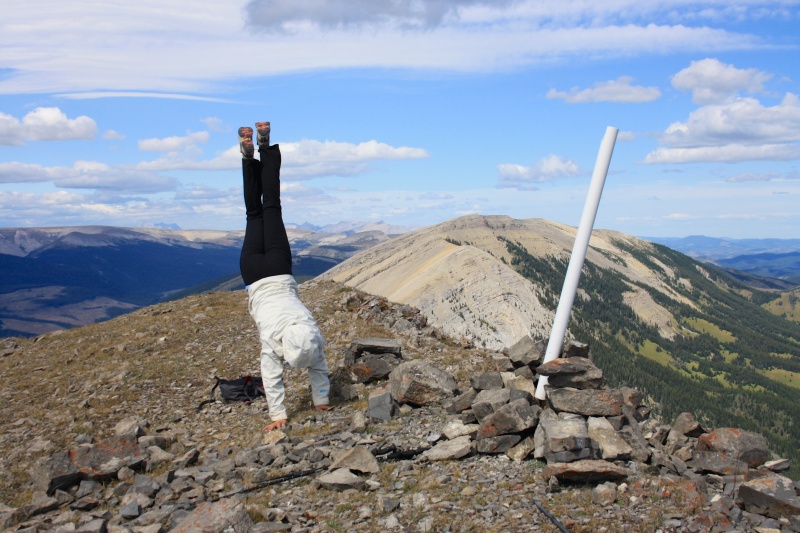 Janelle celebrates her first ever peak with the traditional McMurray hand/headstand on the summit.

Another view west from the summit. The Cache Creek Elevators are visible in the background. The views from Coffin are not that spectacular, but it is still a worthwhile trip. 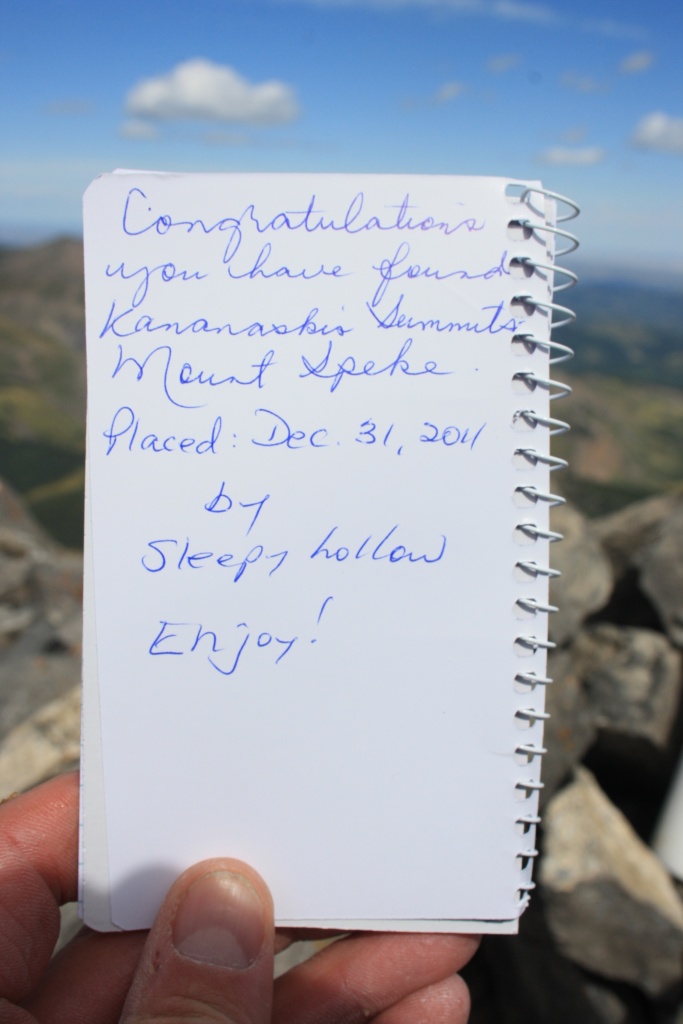 This was a new registry that was placed on the summit on December 31st 2011. I think it has something to do with geocaching given the name ‘Sleepy Hollow’, but we couldn’t find another registery, so we treated it like a standard one. Coffin Mountain would be a fun winter hike. 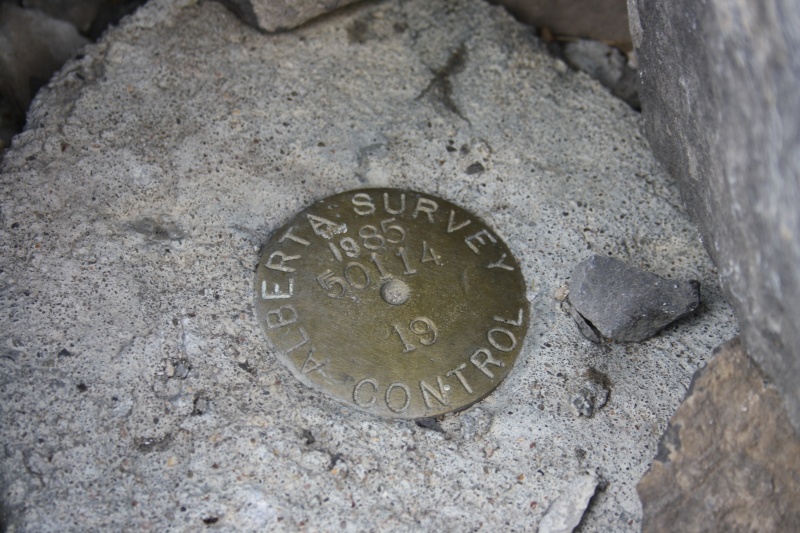 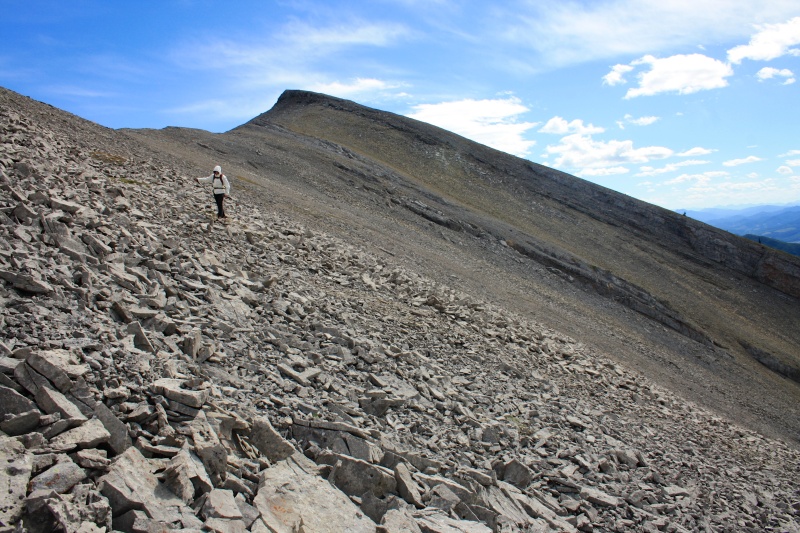 We sidesloped past the false summit on our way back. 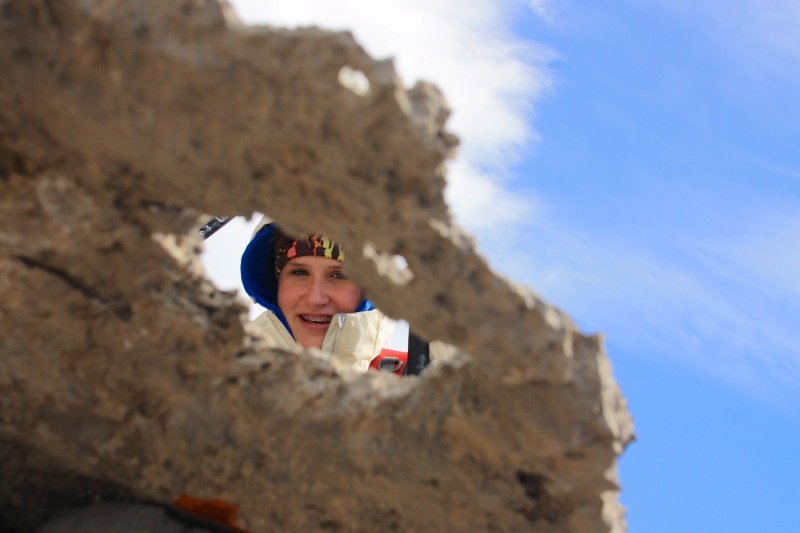 A cool rock with a face inside it.

The finish line appears. You can just see our 4Runner through the trees as well as a quad on the road near the top of the picture. Bowhunting season had just opened and we met a hunter who had parked next to our car and was gearing up to hunt some deer. Fortunately we were leaving just as he was starting – otherwise it could have been a re-anactment of the Hunger Games as neither Janelle or I were wearing anything with orange on it.

Janelle on the slopes of Coffin Mountain (Mt. Speke) after summiting her first peak.  Just as Turtle Mountain will always be special for me because it was my sons’ first peak, Coffin Mountain will now be as well.  The true test came later when we were driving home and Janelle asked when we could summit another mountain.  Mission accomplished!