Table Mountain in the Castle Wilderness is a popular destination because it is relatively quick and offers great views of the surrounding landscape.  One of the curious things that I’ve learned about Table, is that many people only make the trek to its western plateau before turning around.  The summit it seems, sees fewer visitors perhaps because it requires an additional ~1.8km to reach.  With all this in mind and a few hours to spare on a hot and humid summer day, I made the drive from Lethbridge to experience the mountain as a solo hike.

There are many ways up Table Mountain but the most common way is to follow the trail until you come to the second gully and then follow it up to the western plateau. I decided that I was going to try a different and less popular approach using Andrew Nugara’s route from, More Scrambles in the Canadian Rockies, which ascends the first gully and involves a bit of scrambling. 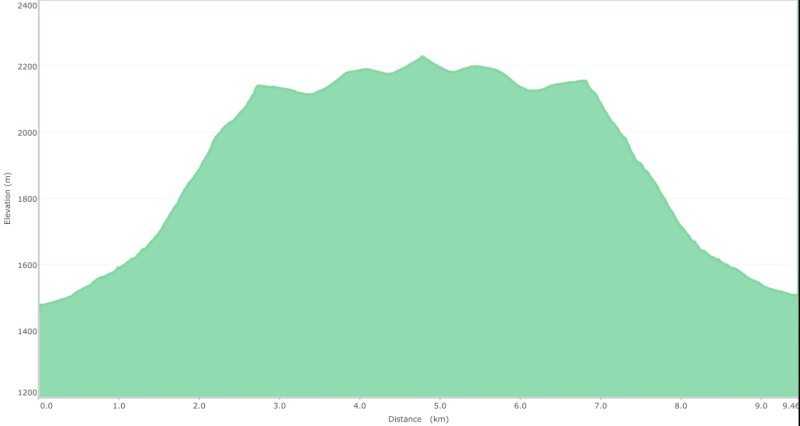 I made it up to the summit and then back down to the car in just under 4 hours. Like I said, this was a relatively quick hike, especially for a hot day. The total distance was 9.5km.

I didn’t have any trouble finding the trail from the Beaver Mines Lake parking lot, though in some places, it was a little overgrown.

After following the trail through the forest for a short period of time, this is the view of Table Mountain that greeted me when I emerged from the trees. My route left the trail and went up the gully between the two outliers on the left. The usual route follows the trail to the 2nd gully which is located to the right of the outlier in the centre. 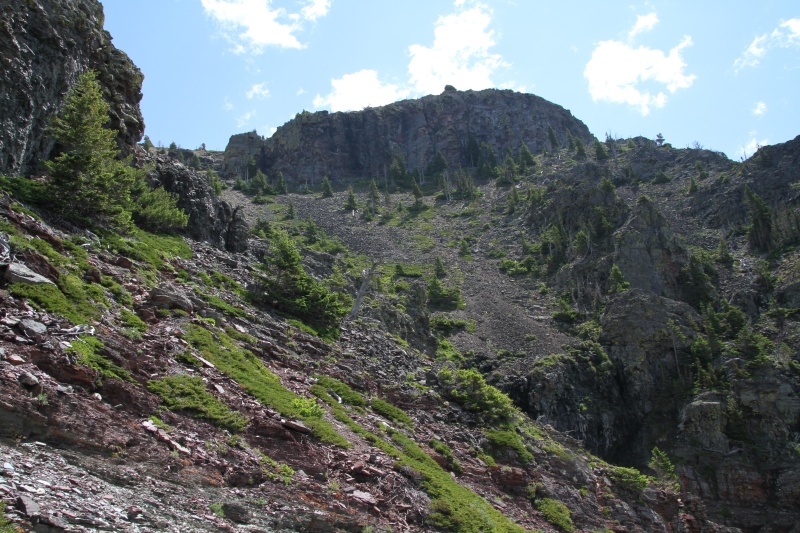 After hiking up climber’s left of the gully (the gully itself becomes quite deep so stay out of it until later) there is a minor rock band to climb over that is at the bottom of the large rock wall on the left.

Once over the rock wall, this was the view up the gully to Table Mountain’s western plateau.

Once I topped out of the gully, I needed to need to get through this cliff band to reach the western plateau. There were a few options, but the easiest route was a weakness located on the far left. The orange scree was loose and miserable but it didn’t last too long.

Once out of the gully the views began to open up. Syncline Mountain is on the left and Mount McCarty is just to the left of centre.  There was a noticeable haze all day.

This is the view of ‘Table Top’ from the top of the gully.  This tall ridge is part of a fun, multi-destination day that I call, ‘The Whistler Loop‘. 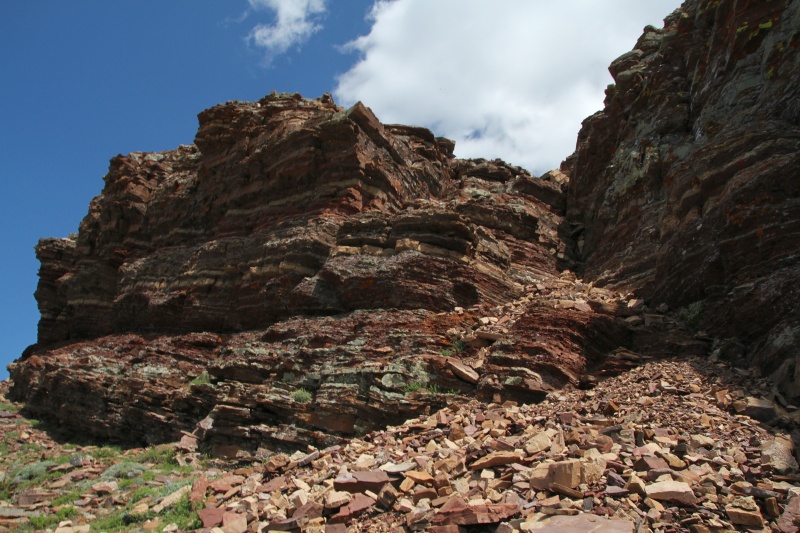 The obvious and fairly easy weakness in the rock band below the western plateau.

The broad and expansive western plateau of Table Mountain. The summit is in the distance on the left. There were many people on the mountain today including a group of Americans who can be seen on the left.  From here it is a very easy and pleasant ~1.8km hike to the summit. 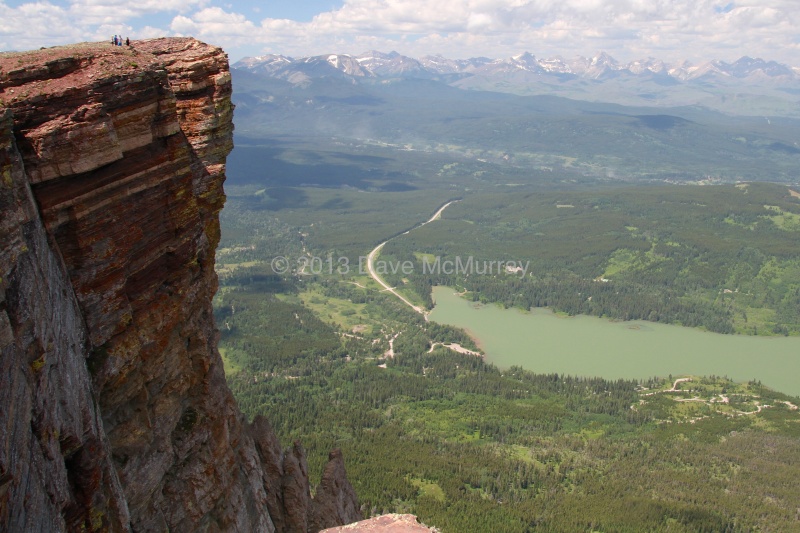 Looking off the western plateau at Beaver Mines Lake. The American hikers are on the cliff to the left. The lake itself was still silty after the extreme rains from a few weeks ago.

The summit of Table Mountain.

Looking west from a high point on the plateau. There is an obvious trail that leads from the plateau to the summit which is indicative of Table’s popularity, though many people still turn back after reaching the plateau. 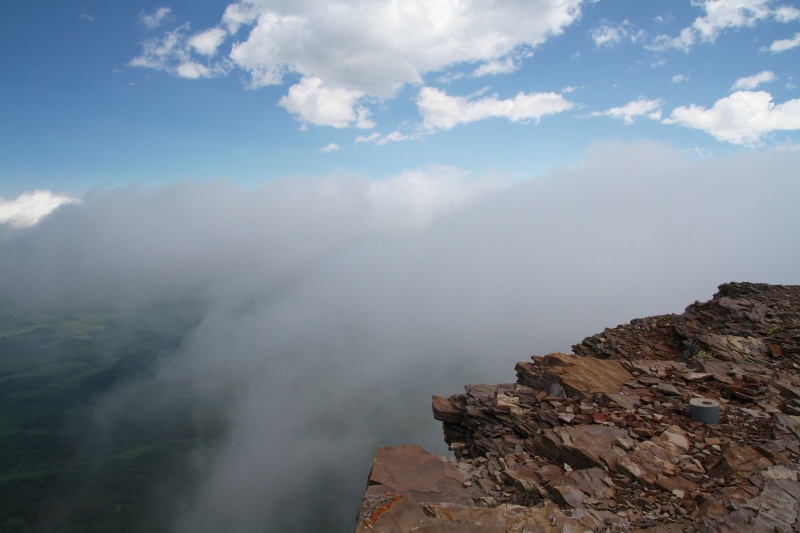 Clouds form and roll past the summit.

A cloud envelops the American hikers as they make the easy approach to the summit of Table Mountain.

Looking west from the summit back to the western plateau.  Southfork Mountain and Baranaby Ridge are in the background. 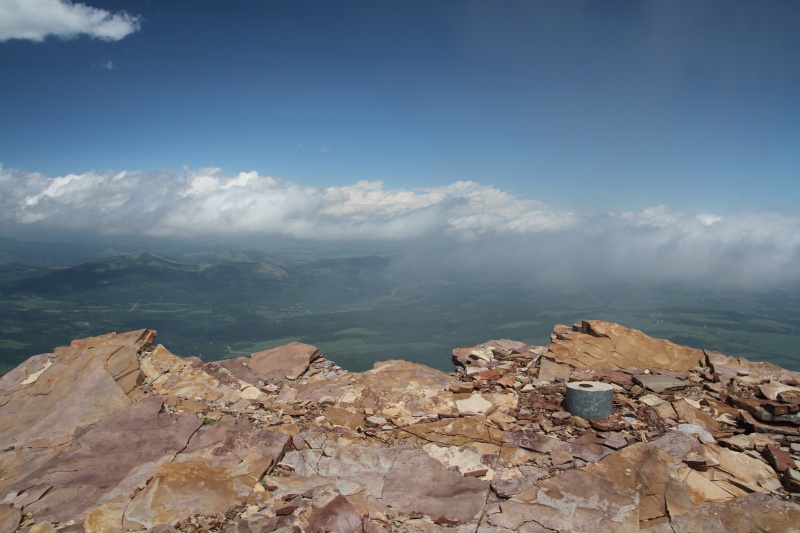 Looking east off of the summit.

Another summit view to the west, but this time in black and white – which I guess makes me incredibly artsy.  😉

The view north from the western plateau while on my way back.  On the left are Syncline Mountain and Mount McCarty.  Mount Darrah is the tall peak in the distant centre.

The view west from the western plateau as I head back to the car.  The Whistler Fire Lookout is on the left.

Looking down at my ascent and descent route. You can see the trail on the green patch at the bottom. Though not particularly challenging in terms of a scramble, hiking Table Mountain still made for an extremely fun afternoon.