My original plan had been to visit North Castle last year as part of a late season loop that included “Frankie Peak”, “Larry Mountain”, and Mount Gladstone with my son, Nathan, and his friend, Keagan.  Unfortunately, ice-covered rock prevented us from attempting the exposed down-climb off of “Frankie” to the col with “Larry Mountain”.  Fast-forward to today, and in keeping with my recent trend of taking care of unfinished mountain business, I found myself hoping to get up not only North Castle, but also Mount Gladstone, and possibly “Larry Mountain” – though this time in reverse.  Joining me was my friend, Mark Kadijk, who is always a pleasure to hike with.

North Castle is the official name of a tree-covered bump located directly to the north of Castle Peak and immediately to the southwest of Mount Gladstone.  Our route followed that of Bob Spirko’s and Sonny Bou’s 2008 trip, though we ended up starting a little further past the second creek bed than they did.  Despite limited views from the actual summit, we were rewarded by venturing a little further to the northeast, where we were treated to the impressive sight of Windsor Ridge, Mount Gladstone, and Victoria Peak.

From North Castle, we then began to make the ~2 km trip to the summit of Mount Gladstone.  I’d wanted to visit Mount Gladstone for many years and was thwarted on my first attempt back in April 2015.  Unfortunately, Mark – who is an excellent mountaineer – was battling inexplicable hip pain throughout the trip, and shortly after starting up the slopes of Gladstone, determined that he was in too much discomfort to continue.  He then decided to wait for me back on the ridge to North Castle while I continued on to the summit of Gladstone.  After I returned, we decided to forgo a possible trip to “Larry Mountain” and instead, returned the way we came. 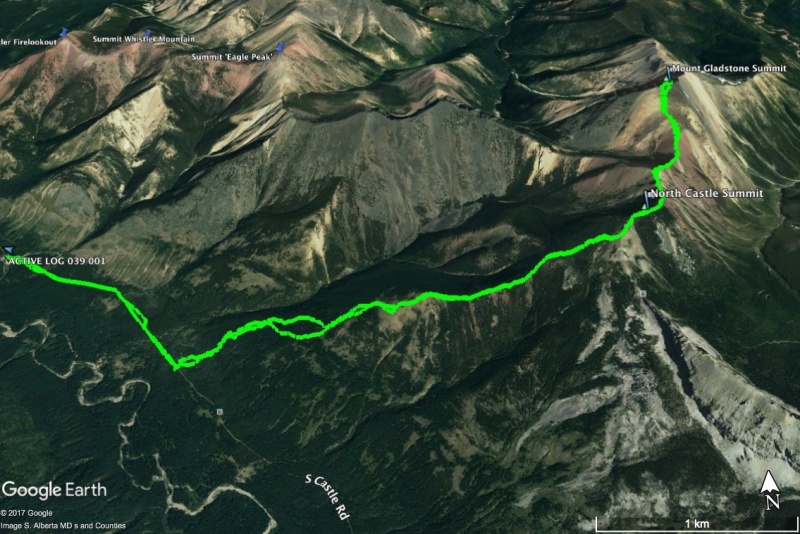 Our starting point was identical to that of our Lys Ridge and “Frankie Peak” trips.  To get here, we headed south from the hamlet of Beaver Mines along Highway 774 until we came to the turnoff for Beaver Mines Lake.  Here we turned left and followed the gravel road for ~3.7 km until we came to the South Castle Road, which was located on our right.  We followed the road for ~600 m before arriving at a couple of information signs for the Castle Special Management Area.  Also in the immediate vicinity were numerous random camping spots.

Here is where things get interesting and unless you have a 4×4 or some type of high clearance vehicle, you will need to park your car and get out your bike.  Fortunately, I had my trusty 4Runner so we followed the road across the dry creek bed and proceeded another 6.9 km down what at times, was a rough road, until we came to what used to be washed out section of road just beyond a well marked camping site next to the river.  The last few times that I’d been here, getting past the washout with a vehicle would’ve been tough, but the recent Kenow and Castle Branch wildfires required firefighters to use the South Castle Road, so the washed out section was repaired and is now drivable – at least until the government closes it to all motorized vehicles.

Unfortunately, I assumed that the road was still washed out and so we parked across the road from the campsite and got on our bikes.  From my 4Runner, we biked for ~1.75 km until we came to a dry creek bed.  Including the repaired washout, this was the second creek bed that we encountered after parking.  We could have started here like Bob and Sonny did, but chose to ride down the road for another ~300 m before ditching our bikes and heading into the trees.  In hindsight, we probably should have continued another 500 or 600 m down the road before starting as this would’ve gotten us onto more open slopes sooner- but it would have also been steeper than following the more gradual contours of the ridge.

After leaving the South Castle Road, we entered the forest and had to pick our way through ~500 m of deadfall before progress became easier.  A further ~1 km of travel through light forest finally brought us to North Castle’s open slopes.  We followed these for ~800 m onto the ridge crest and from here, it was merely a matter of following the treed ridge all the way to the summit ridge – a distance of ~1.7 km.  Just prior to the summit ridge, we deviated slightly to the south where we took in some awesome views of Castle Peak and Windsor Mountain from the connection point with Windsor Ridge.  From here we then gained the summit ridge and at some point along its tree-covered path, we passed over the summit (if there was a cairn, it was buried beneath the snow).  The total distance from the point where we left the South Castle Road and the summit was ~4.3 km.  From the summit, we continued to the northeast for a couple hundred metres to a much better vantage point.

Our total distance travelled was 17.1 km with total elevation gains of 1356 m.  Our roundtrip time was 7 hours and 8 minutes.

Gearing up at our starting point on the South Castle Road.  The last few times that I’ve been here, this was as far as I could drive because of a washed out section of road.  However, the recent Kenow and Castle Branch wildfires required firefighters to use the road and, unbeknownst to me, the damaged section had been repaired.

We came across this freshly made fire break shortly after starting, at least I’m assuming this is what it is.  In the centre is our ascent route up Lys Ridge.

Approximately ~1.75 km from my 4Runner, we came to the dry creek bed described by Bob Spirko. 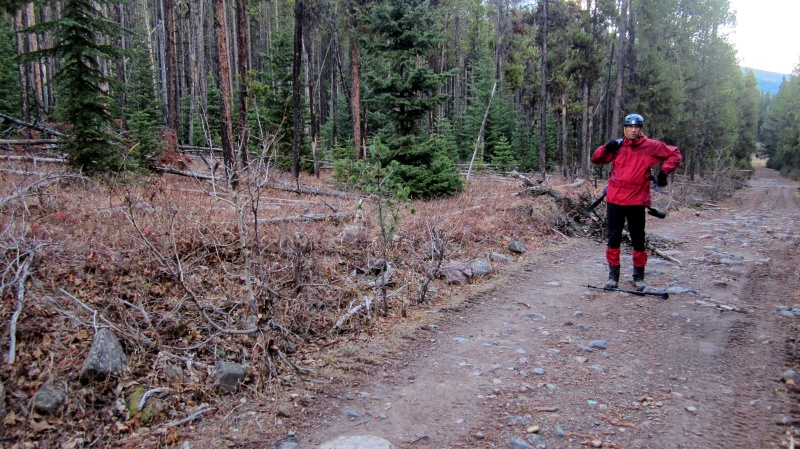 We continued down the road for another ~300 m before ditching our bikes.  In hindsight, we probably should have continued another 500 or 600 m down the road before starting, as this would’ve gotten us onto more open slopes sooner.  However, it would have also been steeper than following the more gradual contours of the ridge.

Looking from our starting point on the road into the trees.

Once past the deadfall, travel through the forest was relatively easy.  (Photo by Mark Kadijk)

After hiking for ~1.5 km through the forest, we finally came to some open slopes.

West Castle (left) is one of two official summits on Lys Ridge.

What a gorgeous morning to be on a mountain!  The views from North Castle’s open slopes are excellent.  In the distance centre is where the Castle Branch wildfire took place and that mist may actually be ash being stirred up by the wind.

The dry creek bed and our starting point are in the centre.  It was alarming to see how low the water levels were in the South Castle River (far left).

Mark takes in the excellent views of Castle Peak (left) and Windsor Ridge. On the ridge crest and looking towards the summit ridge (centre) – though the summit can’t be seen.  Mount Gladstone is on the far left.

A reverse view of the previous picture.  (Photo by Mark Kadijk) 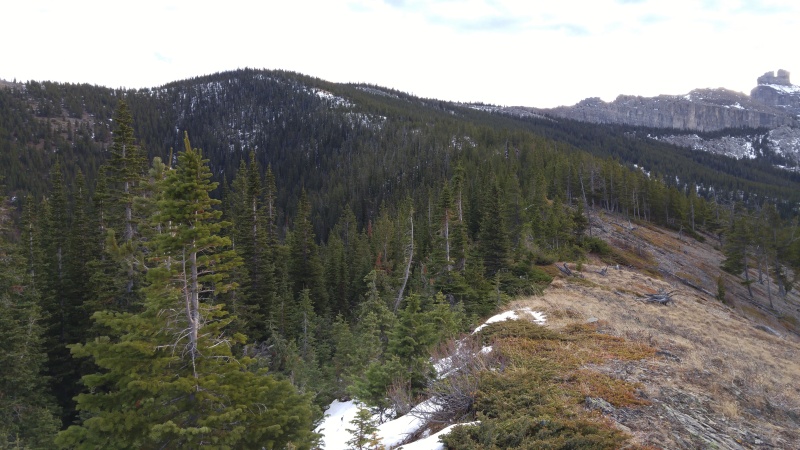 A closer look at the ridge.  (Photo by Mark Kadijk) 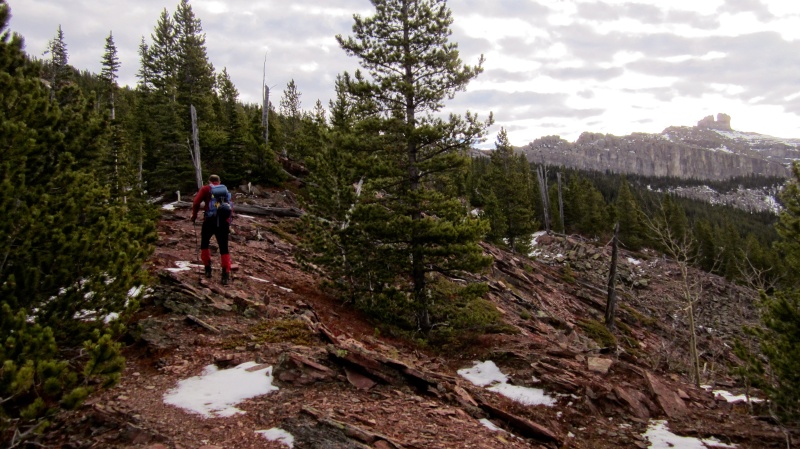 Though mostly treed, it was a pleasant – and surprisingly windless – hike along the ridge. 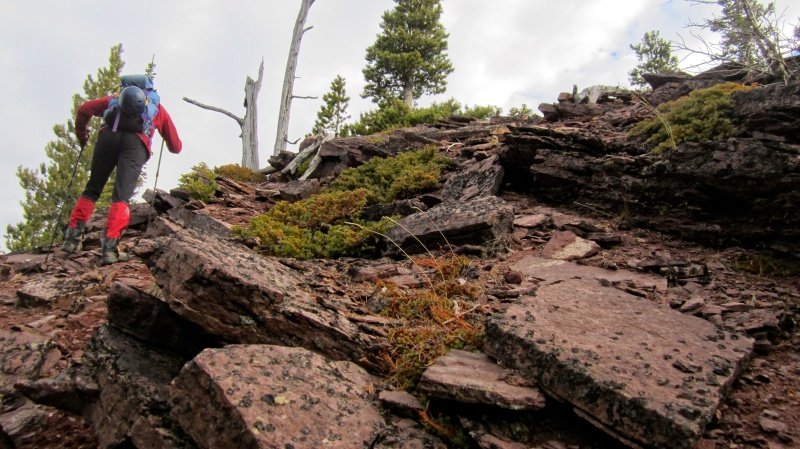 Mark scrambles up a short section of rock. 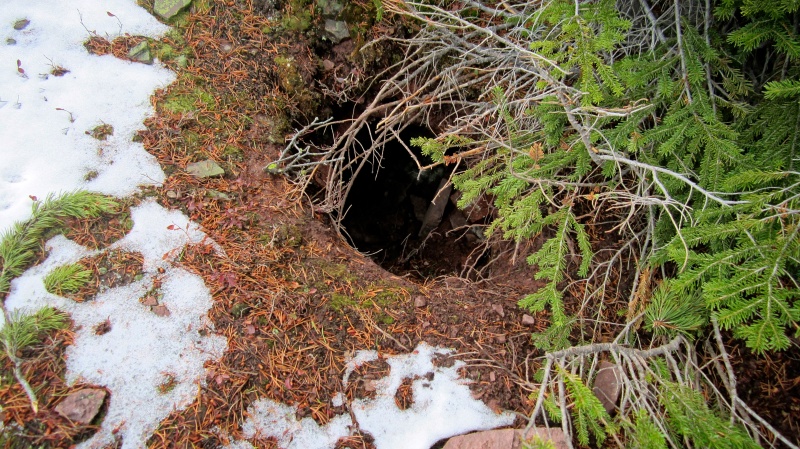 We stopped for a quick bite to eat along the ridge, and after about 10 minutes, Mark says, “What’s that?” and points to a large hole about half a metre in diameter beneath a nearby tree.  After some cautious investigating, we concluded that no one was home because there had been a cave-in a short ways past the entrance.  Nevertheless, neither of us were keen to encounter a white rabbit – especially if this turned out to be the Cave of Caerbannog! 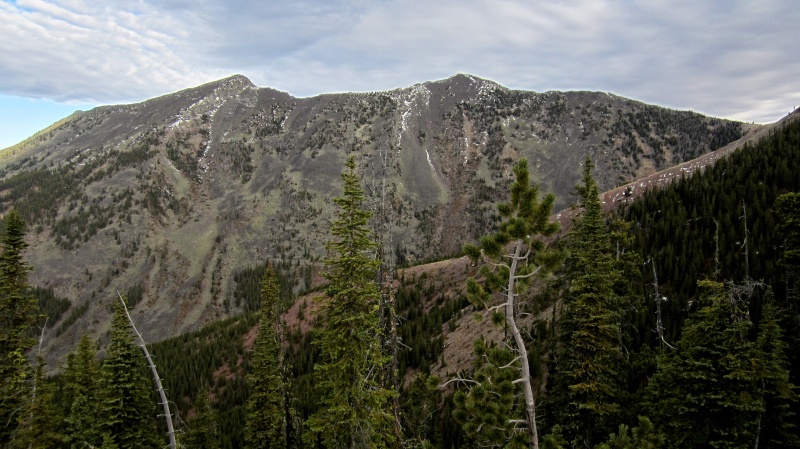 Looking to the north at “Frankie Peak” (left) and “Larry Mountain”. 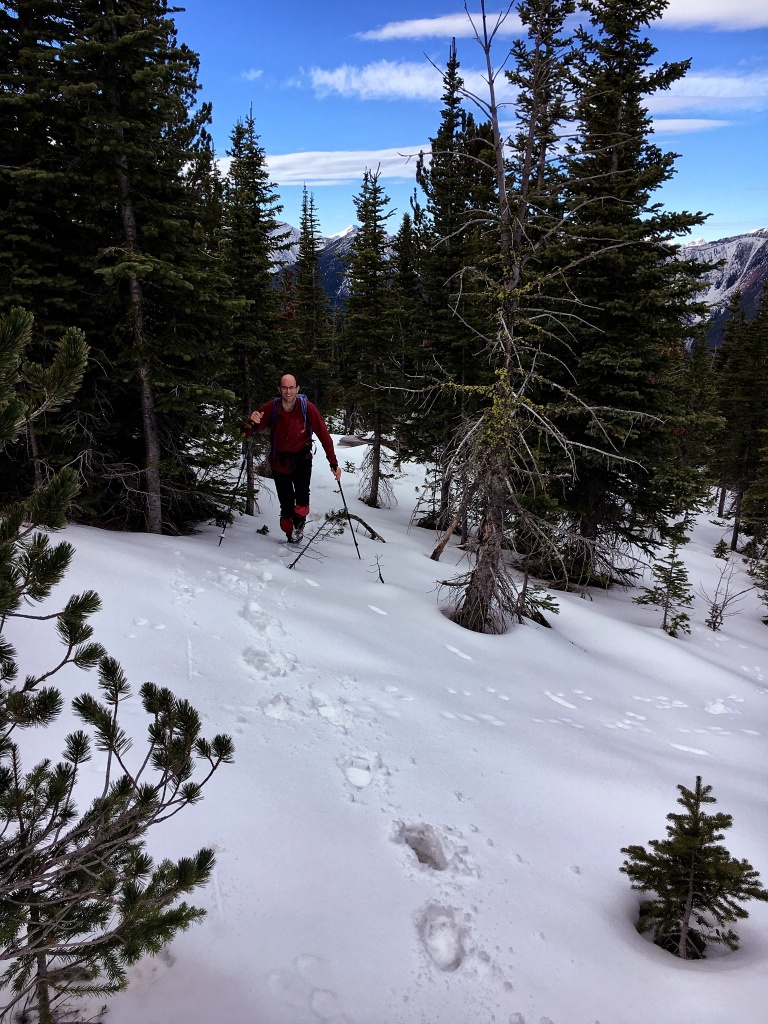 We found ourselves walking through snow as we drew closer to the summit ridge.  At first it was only ankle deep, but the higher we went, the deeper it became.

Just prior to reaching the summit ridge (left), we diverted to some open slopes located to the south (climber’s right).  This was a great move because not only did it get us out of the snow, it also offered up some amazing views.

The view back from the intersection with Windsor Ridge.

This alone makes the hike up North Castle worth it!  An awesome view of Windsor Mountain (left) and Castle Peak, the two most prominent features found on Windsor Ridge.

After enjoying the views from the open slopes, we then made our way onto the summit ridge.  Deep snow and trees made travel tedious and it was difficult to tell exactly where the summit was.  This ended up being the best view that we could get.  Mount Gladstone is behind Mark.

Heading further down the summit ridge towards a better vantage point.  (Photo by Mark Kadijk)

Ah!  This is more like it!  “Frankie Peak” and “Larry Mountain” are on the left and Mount Gladstone is on the right.  In the background centre are “Table Top” and Table Mountain. 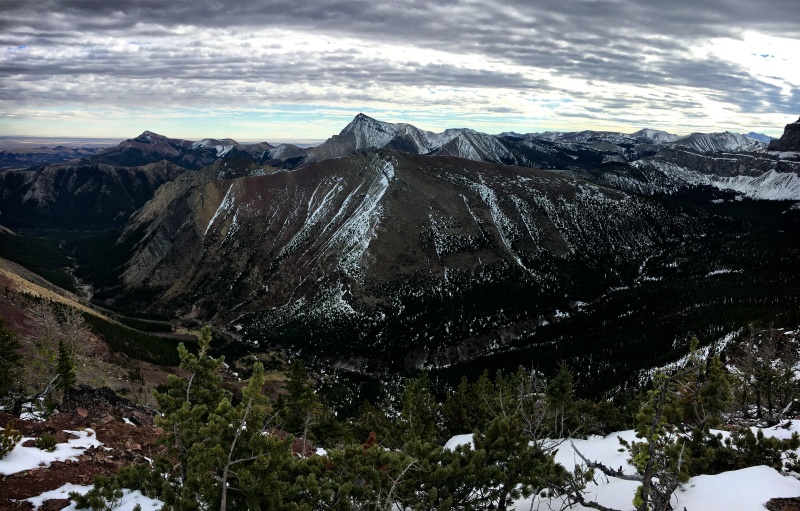 Looking west towards the summit of North Castle (left).  Barnaby Ridge and Southfork Mountain are in the centre.

Looking back Windsor Mountain and Castle Peak from further down the ridge.  The summit of North Castle is on the far right. 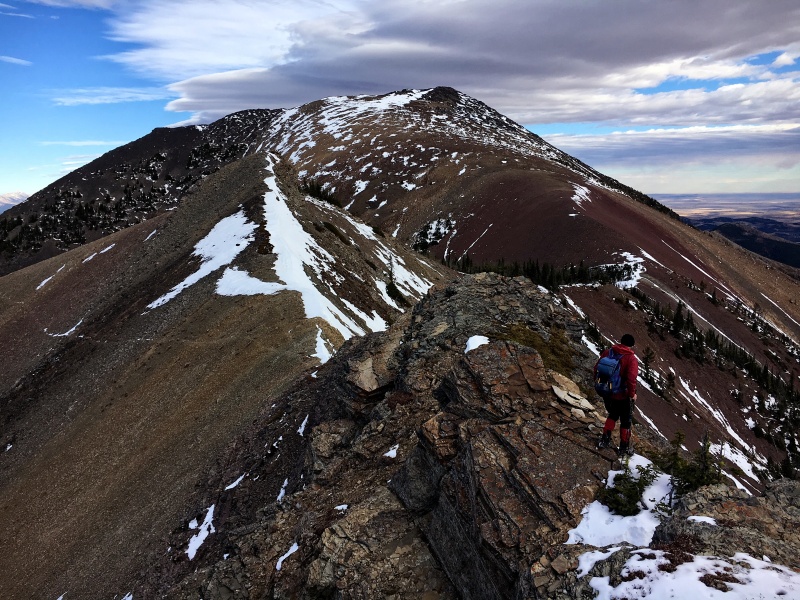 After enjoying the views from North Castle, it was time to head to Mount Gladstone.  Click to continue to our Gladstone report.