Feeling lethargic after a terrible night’s sleep, I dragged myself out of bed on Saturday morning and set off for a solo hike with my destination to be determined en route.  Finishing my second mug of coffee just prior to the Pincher Creek turnoff, I felt coherent enough to contemplate returning to complete my original “Frankie Peak” loop from last fall or returning to Middle Kootenay Pass to ramble up “Middle Kootenay Mountain”.  However, the cloud-covered peaks to the south convinced me that I should keep heading towards the Crowsnest Pass – even though I knew the forecast called for clearing later in the day.  Besides, I told myself, I had left the house too late in the day (it was just after 9 am) to stomp around the Castle.  Yup, I was only half into this.  Perhaps I was still recovering from the previous week’s gruelling ‘ascents’ of Space Mountain, Splash Mountain, and The Matterhorn? 😉

Arriving in the Pass I began to think about making this a fishing trip and I wondered how a couple of my ‘secret’ spots were producing.  After all, I had my bike with me and this would hasten the time  to reach them…  Or maybe I should just park at the south end of Willoughby Ridge and hike up to the Ironstone Fire Lookout?  Or perhaps I should bike the old logging roads on Sparwood Ridge and then hike up to the old Natal Lookout?  Argh!  I had to decide because I needed to let my family know what my plans were.  Finally, with Mount Tecumseh, “Shooting Star Peak”, “Alexander Creek Mountain”, and “Deadman Peak” looming in front of me, I was inspired enough to decide on Allison Peak using a route that I had scoped out years ago via Racehorse Pass.

As I biked up to Racehorse Pass, I thought that I should make this a two peak day by including the unnamed outlier located immediately to the southwest of Racehorse Mountain (Peak).  In 2014,  Bob Spirko, Dinah Kruze, and Sonny Bou ascended this minor peak as a poor-weather consolation prize, and dubbed it, “Mount Racehorse”.  Since then, others including Vern Dewitt, have also made the ascent and the name has stuck.

Arriving at Racehorse Pass, my lethargy returned and I spent several minutes trying to decide (a.k.a walking around in circles) whether I should simply ascend up to the ridge and tough out the long slog to Allison, or head over to the much closer and more benign, “Mount Racehorse”.  My appetite for two peaks had evaporated and I knew that I needed to choose.  Yup, I was only half into this.

That’s when I met Matt and Sandra Clay.  I knew that someone else was hiking in the area because I had parked behind a truck at the start of the road.  Outside of nearby Crowsnest Mountain, Mount Ward and Window Mountain, it’s rare to encounter other hikers in the area – though the last time I was here, I was also surprised to see another hiker, who as it turned out, happened to be Andrew Nugara.  Matt and Sandra had just descended from Racehorse Mountain and were heading over to ascend their second peak of the day, which just so happened to be, “Mount Racehorse”.  Their friendliness and contagious enthusiasm instantly helped me to decide on “Mount Racehorse” – and they were gracious enough to allow me to invite myself into their trip!

Matt runs an excellent online hiking site called, Matthew Clay, and I would definitely encourage you to read his trip report for “Mount Racehorse.  In what seems like a pattern lately, I now find myself once again promising to return to complete my original plan.  Yet, had I immediately bombed up to the ridge leading to Allison, I never would have had the gift of meeting Matt and Sandra.  Lethargic dithering apparently has its rewards!

To get to “Mount Racehorse” and Racehorse Mountain from Lethbridge, turn right (north) off of Highway 3 and onto the Allison Creek Road just west of Coleman.  Once the pavement ends, the road forks.  Keep to the right and follow the road for about ~15km.  The road up Racehorse Pass comes ~1.5 km after the left turn for Window Mountain Lake (~17km from the highway).  It is the second left once you cross the bridge over South Racehorse Creek (this is the only bridge you will cross up to this point).  From the start of the road, it is a relatively pleasant ~4.3 km bike or hike to reach the Pass.  On my bike it took me just over 30 minutes.

Upon reaching the Pass, the terrain flattens and a small side road can be found that leads south from the main road towards the valley between “Mount Racehorse” and the ridge leading to Allison Peak (this ridge is actually the headwall above Window Mountain Lake).  We followed this road for ~300 m before leaving it to bushwhack for ~400 m to the mountain’s southeastern slope.  In hindsight, it would be much easier to simply keep following the road up to the valley and ascend from there.  This would be our descent route.  Overall, it was an easy ascent with only a couple of minor cliff bands to negotiate.

A second map that also includes my 2014 scramble route up Racehorse Mountain.  Just like Matt and Sandra, it makes sense to include both in one trip if possible – unless you’re only half into it.  😉 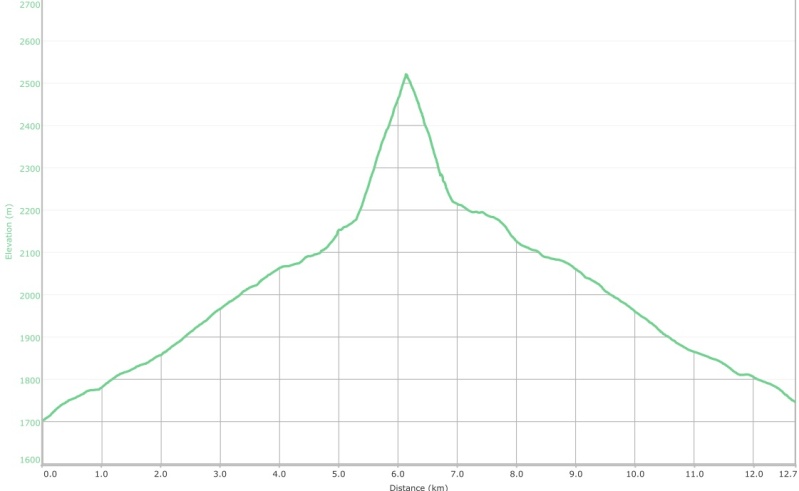 This half-hearted trip came in with a total distance of 12.7 km and a total elevation gain of 821 m.  My total roundtrip time was 5 hours and 13 minutes.  I chose to walk back down the road with Matt and Sandra, but had I used my bike, I would’ve shaved off way more time.

My starting point up to Racehorse Pass.  If you plan to do much exploring in the Crowsnest Pass and the Castle, it’s a good idea to bring a bike because many of the approaches follow old roads.  Even if you have to push your bike up, you’ll be thankful to have it at the end of the day.

My first look at the ridge leading to Allison Peak (left) and “Mount Racehorse” (centre).

My grousing seemed to have conjured an actual grouse.

Looking down the road towards Racehorse Pass (centre).  Mount Ward is on the left and the lower slopes of Racehorse Mountain are on the right.  “Mount Racehorse” is in the centre.  It took me just over 30 minutes to ride the ~4.3 km from my 4Runner to the Pass.

My moment of lethargic dithering in Racehorse Pass.  Should I just head up to the ridge and tough out the long journey to Allison Peak?  After all, gaining the ridge is easy and it looked to be a terrific ridge walk…

…or should I head over to the much closer “Mount Racehorse” and call it a day?  I knew by this point that I probably would not do both…

… or should I just crash someone else’s ascent up “Mount Racehorse”?  😉  Introducing Matt and Sandra Clay.

After walking for ~300 m down the side road, we then left it to bushwhack ~400 m to the mountain’s southeeastern slope (pictured).  From here, everything is a straightforward hike.

Matt and Sandra look back to their first summit of the day, Racehorse Mountain.  They had ascended and then descended next to the gully in the centre.  This was the descent route that I had used in 2014, but I had ascended by scrambling up from the bowl on the southeast face (not shown) to gain the ridge on the right.

We easily picked our way through some small cliff bands.

Looking towards the summit.

About halfway up we came across some bear diggings. 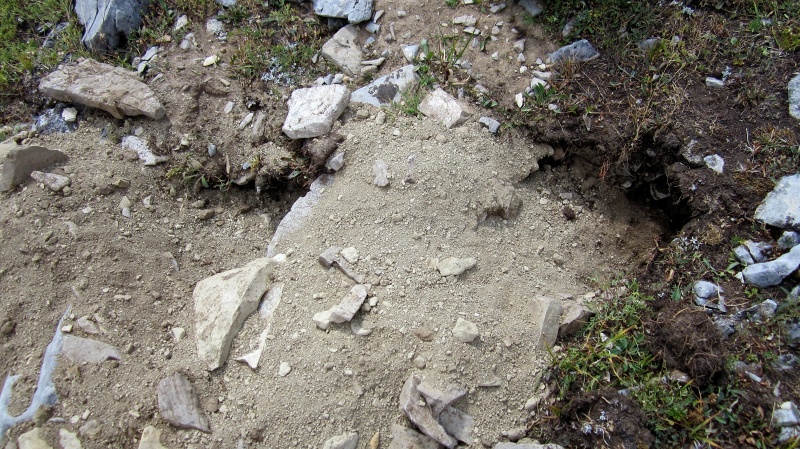 These marmot holes had really been torn up!  You might say that the bear had ripped them a new one…  😉 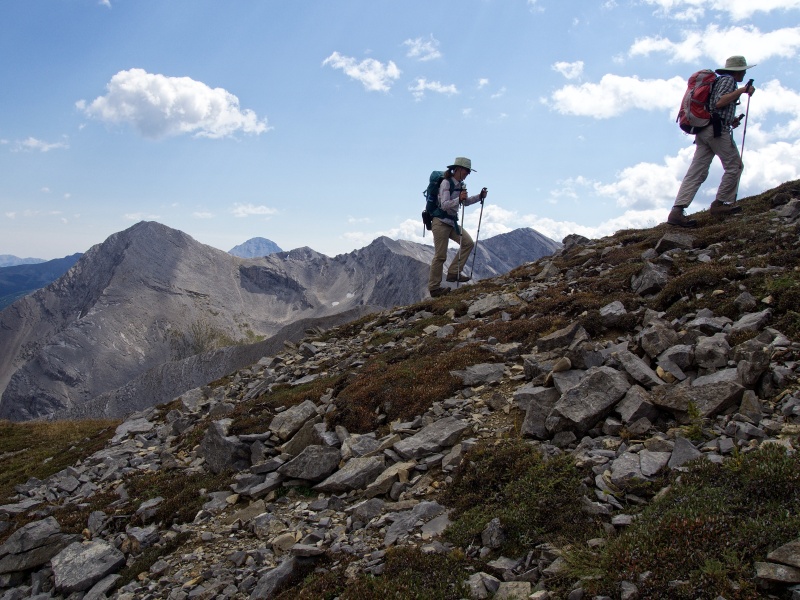 One last break before reaching the summit. 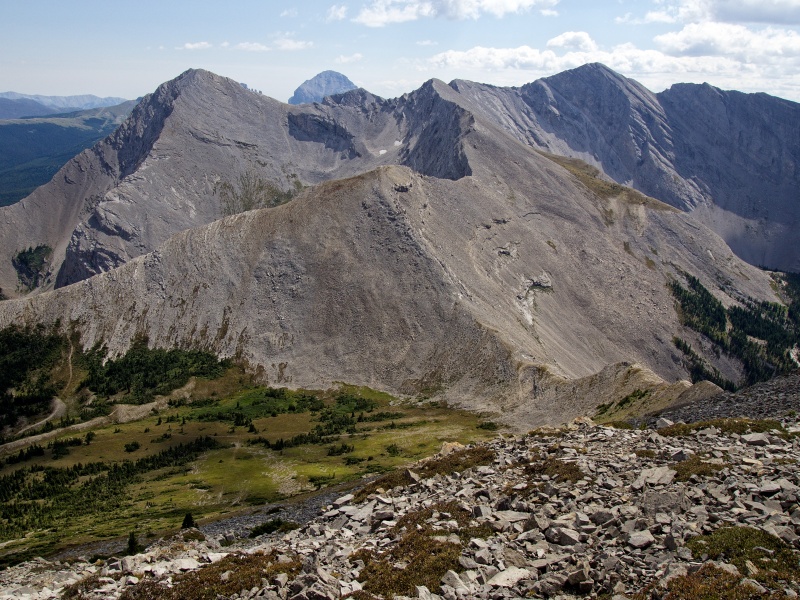 The connecting ridge that I was going to follow to Allison Peak is in the foreground.  Window Mountain Lake sits on the other side.  I guess I’m coming back…  Edit: I came back one week later and summited Allison Peak using this same route. A pano to the north… 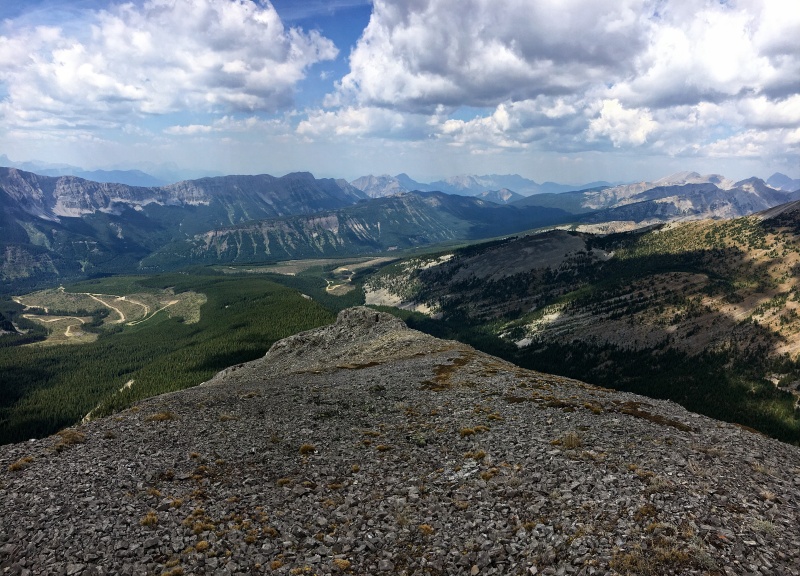 …and finally, to the south.  The summit offers some decent views.

A telphoto to the the northeast.  Thrift Peak is on the far left and Thunder Mountain is to the right of centre.

In the distant centre sits “Lightning Peak” while to the right of centre are Centre Peak and Caudron Peak.   “Vicary Creek Ridge” and McGillivray Ridge are middle distance to the left and right of centre respectively.  The route that I was going to use to gain the ridge leading to Allison Peak is in the foreground.

I was somewhat surprised to see a well-worn trail carved into the slopes of Mount Ward (left).  The spires from the Seven Sisters can also be seen poking over the skyline slope of Ward.  The window on Window Mountain is to left of centre and behind it is Crowsnest Mountain.  Allison Peak is on the right.

A telephoto to the southwest highlights Loop Ridge (left of centre) and Mount Erickson (right).

A telephoto to the northwest.  Sheep Mountain and Mount Salter are on the left (both are on my ‘To Do’ list) and Mount Lyne (part of the Wisukitsak Range) is on the right.

To the north, Tornado Mountain (centre) and Gould Dome can barely be seen through the haze.  The summits of Mount Domke (also on my ‘To Do’ list) and Mount Erris are on the left. 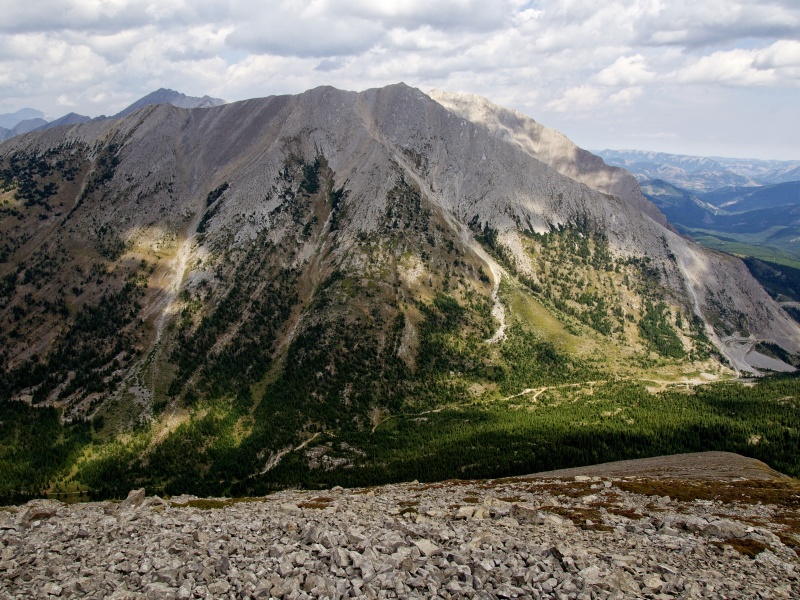 I upscaled the small cairn and named it Sheldon. 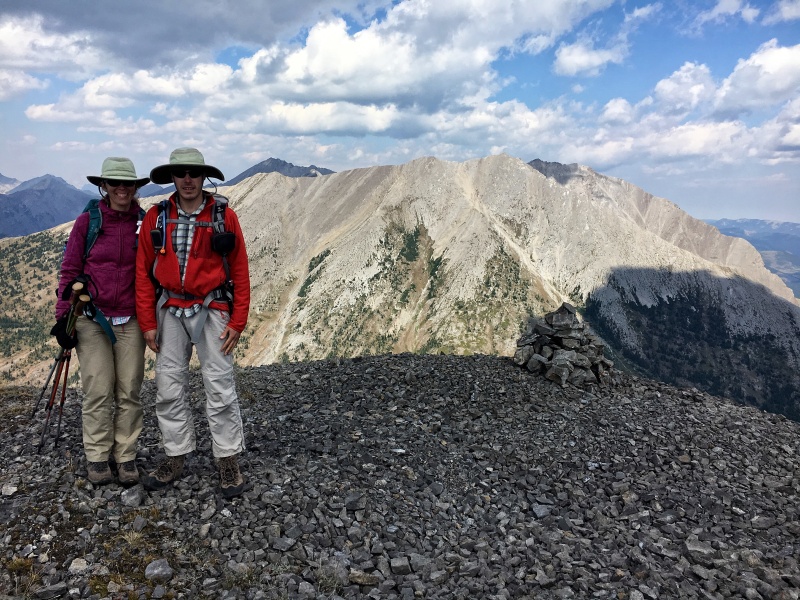 Sandra and Matt on their second summit of the day with their first in the background.

When we were in California last week, my 18-year old daughter told me that I take selfies like a dad.  I responded by saying, ‘Thank you!  I had no idea that dad’s were so respected in the arts community!”

After enjoying lunch and some lively conversation, it was time to leave. 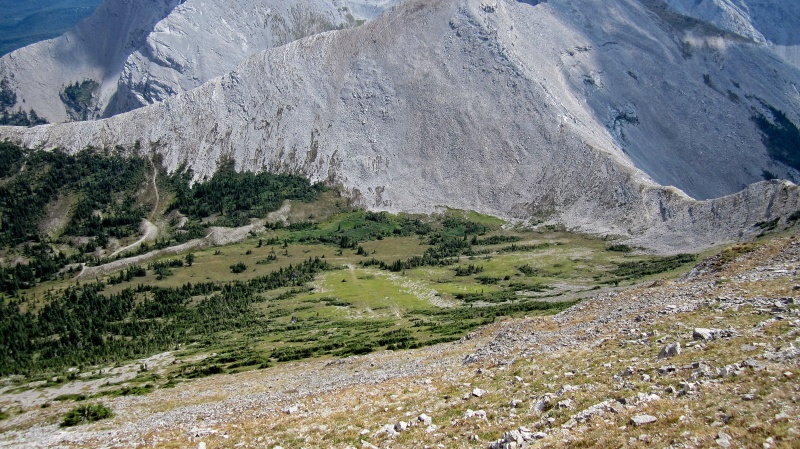 Instead of retracing our steps, we headed further to the south and descended into the little valley.  From here we would simply follow the small road back to Racehorse Pass.

Sandra makes her way down. 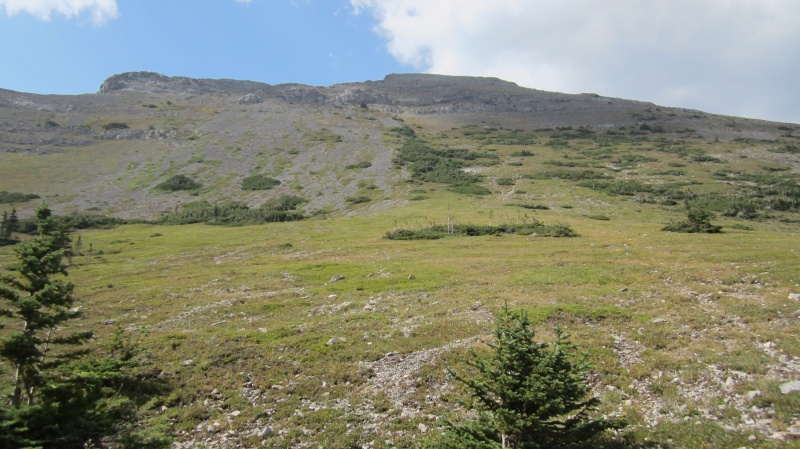 Looking back to the summit from the valley floor.

A huge cairn sits on the connecting ridge between “Mount Racehorse” and the ridge to Allison Peak. I think this might be a provincial border marker – that or someone named Sauron has a plan…

The little valley is quite scenic.

We came across a second grouse and her chicks.

I wonder if it would be worth it to push my bike up the side road and into the valley when I come back to try the ridge walk to Allison?  That way, when I return, I can just drop into the valley and coast all the way back.  Hmmm…

Back on the main road and heading home.

Initially I thought these might be cougar tracks because I couldn’t see any claws and there were only four toes.  However, after looking at Matthew’s pictures,  I could see claw marks which leads me to believe they might be from a small grizzly – though the absence of a fifth digit is interesting.  Perhaps a sign that this young bear was part of the Russian mob?  😉

Arriving back at Toyota Central.  Even though I didn’t have my usual energetic ‘oomph’ for hiking, I have to believe that everything fell into place for me to meet Matt and Sandra.  They get out almost every week and have begun  hiking more and more in the Crowsnest Pass and the Castle, so I’m looking forward to hopefully joining them once again – though maybe with a bit more warning next time!  🙂