Considered by many historians to be one of the most influential Aboriginal leaders in post-contact North America, Tecumseh was an important figure during the War of 1812.  Part Shawnee and part Cree, Tecumseh, along with his brother, Tenskawatawa – or ‘The Prophet’ – organized numerous First Nations groups around the Great Lakes into a formidable confederacy that resisted unchecked American expansionism.  Allied with the British during the War of 1812, Tecumseh’s confederacy played a key role in the defence of Upper Canada and together with his friend, Major General Isaac Brock, orchestrated a successful ruse that resulted in the capture of Detroit in 1812 and the disgrace of the US commander, General William Hull.  After Brock’s death at the Battle of Queenston Heights on 13 October 1812, Tecumseh became frustrated with Brock’s replacement, Henry Proctor, who continually refused to make a stand against American advances despite having the support of Tecumseh’s warriors.  On 5 October 1813, when Proctor finally did decide to engage in battle with the Americans at Moraviantown in southern Ontario, Tecumseh and his warriors did the majority of the fighting on behalf of the British, but were defeated by the Americans.  Tecumseh was killed in the battle and Proctor fled.

While the current Federal Government has spent millions of dollars on promoting the War of 1812 as a significant national victory for Canada, it is widely accepted that the people who suffered the greatest losses during the War were the First Nations.  Tecumseh’s death shattered the Aboriginal confederacy and would mark the last time in North American history that the First Nations constituted a unified military threat equal to that of the Europeans.  It also marked a significant loss of culture and lands for the peoples of the Great Lakes region as the western territories were opened for the continued expansion of white settlements.

Therefore, as a dutiful Canadian historian ;), I ventured that a scramble up Mount Tecumseh in the Crowsnest Pass would be a fitting way to commemorate the upcoming bicentennial of the Shawnee Chief’s death.  I am still surprised however, how few mountains in Southern Alberta are named after Aboriginal peoples.  As I noted in my blog on Divide Mountain in Montana, while Glacier National Park has many mountains named after Indigeneous Peoples, Waterton National Park and the surrounding region have next to none.  While the nineteenth century Boundary Commission, the Palliser Expedition, and others of the same vein are responsible for naming many of the prominent peaks, there are still many unnamed peaks in the region.  Perhaps it is time that a new campaign of naming mountains begins…

Mount Tecumseh is a fairly popular scramble and we followed Allan Kane’s suggested route from, Scrambles in the Canadian Rockies.  There are actually two official peaks on the massif, with the higher one being Mount Tecumseh and the lower one on the far left being Phillipps Peak.  While a cursory look might suggest that it is possible to walk along the ridge from Tecumseh to Phillipps Peak, in actuality this would be extremely difficult given the steepness of the slabs coupled with loose rock.  I think it is safer to approach Phillipps Peak from the south ridge, that being said, I did spend considerable time contemplating a potential route along the ridge from Tecumseh.

Our plan was to bike the road up to Phillipps Pass from the hamlet of Sentinel, but when I arrived at Jeff’s house to pick him up in the morning, we discovered that his bike had been stolen.  This meant that we now had to walk the 3.3 km or so to the ascent drainage.  One of the things that concerned us a was the proliferation of ‘No Trespassing’ signs near the start of the access road.  These are not mentioned in Kane’s book, but having consulted others, I was told that this should not be an issue.  So with a little hesitancy, we parked our vehicle next to the bridge in the hamlet of Sentinel and started off toward Tecumseh.  It is also possible to reach Phillips Pass from B.C., but we did not choose to do this. 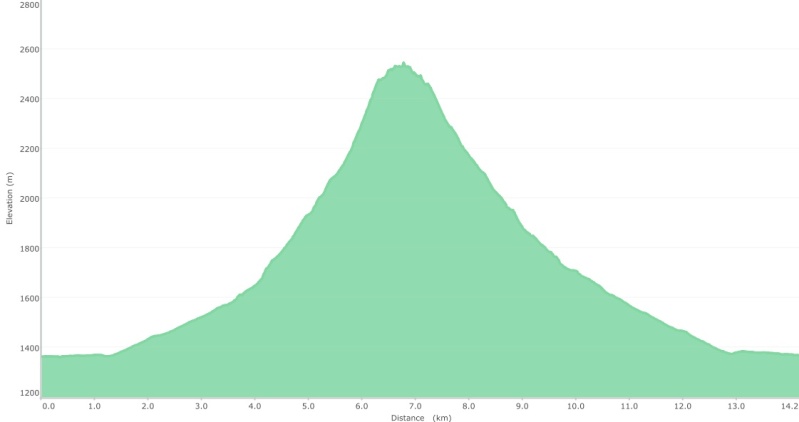 The total distance for our hike was 14.2 km with total elevation gains of 1215 m.  It took us just under 3.5 hours to reach the summit where we enjoyed a lengthy stay amid sunny skies.  Our total trip time was just over 7.5 hours.

Crowsnest Lake on a beautiful Saturday morning.  Sentry Mountain is on the left and Crowsnest Ridge is on the right.  Island Ridge is in the centre.

After a short walk along the road with the ‘No Trespassing’ signs, we entered the Crowsnest Pass Natural Area, a nature conservacy where only foot access is permitted and no foot traffic is allowed off of the road.  Phillipps Pass lies between Crowsnest Ridge (left) and Mount Tecumseh (right).

The ascent drainage is easy to identify from the access road in Phillipps Pass.

The journey up the drainage is fun and full of unique scenery.  One can only imagine how deep and how fast the water must move through here during a normal run off, let alone the historic deluge that occurred this past spring.

More fascinating scenery from the drainage.

After an enjoyable hour of scrambling up the narrow drainage (Kane was bang on for time in his description), we emerged onto a broad and boulder strewn landscape.  Kane makes it clear that while it looks tempting to follow a straight line up from here to the summit, this should be avoided due to steep slabs and loose rock.  The actual route veers to the left at the end of the gully (on the other side of the trees on the distant left) and enters the cirque beneath Phillips Peak.

Looking back toward Crowsnest Ridge and Sentry Mountain from the boulder field at the top of the drainage. 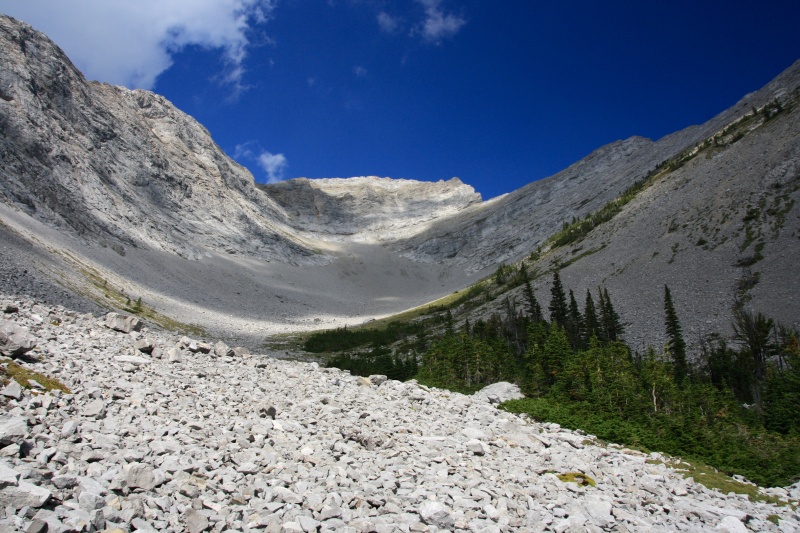 The view of the cirque beneath Phillipps Peak.  Our ascent route is highlighted by a band of sunlight that follows next to the vegatation on the right hand side.  The slope is deceptively steep and we found it easier to climb using a shallow gully as opposed to the surrounding scree.  We would descend down scree slopes further up the cirque.

Looking up toward the summit ridge from the shallow gully.  Despite its appearance from even a short distance away, the slope is deceptively steep.

As we made our way up the shallow gully, we came across constant reminders that millions of years ago, this was once a sea bed.

Jeff scrambles up from the cirque toward the summit ridge. 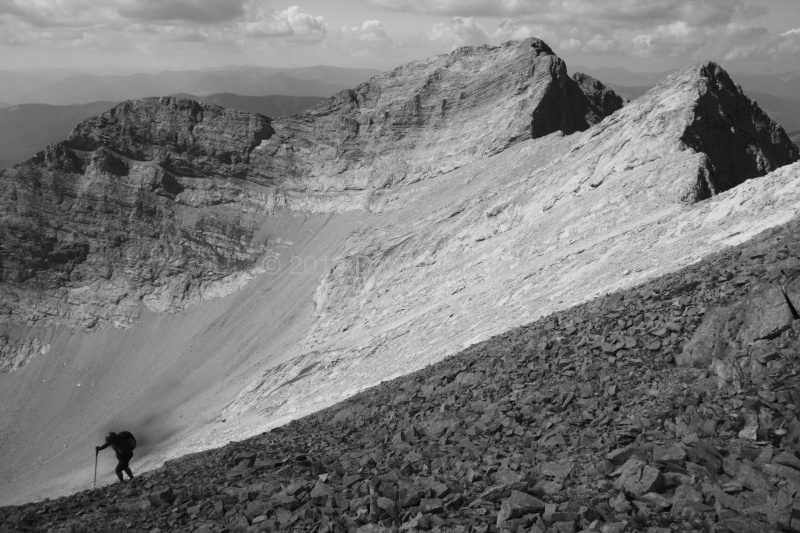 Looking toward Phillipps Peak from the summit ridge.  Steep slabs and loose rock would make a direct line to Phillipps Peak from the ridge extremely difficult.  After studying the options, I concluded that a safer route from Tecumseh would involve climbing up the slopes on the other side of the cirque via a series of goat trails and gaining the south ridge.  Our descent route began at the notch just under the high point on the right hand side.  We followed the organge patch of scree down while staying close to the slabs. 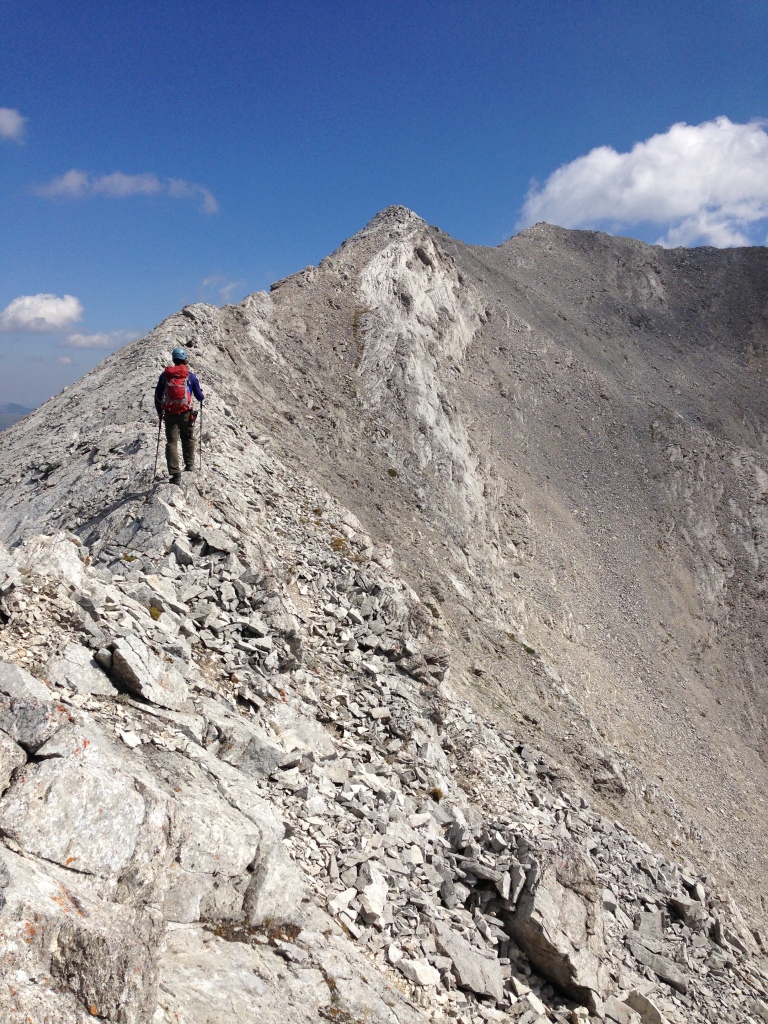 Once on the ridge, the walk to the summit (distant right) is short but fun.  (Photo by Jeff Lang)  Click here to see some of Jeff’s video from the ridge.

The view from the summit ridge to the west.  Mount Erickson is in the distant centre and “Alexander Creek Mountain” is to the right of centre.  “Shooting Star Peak” is in the foreground centre. 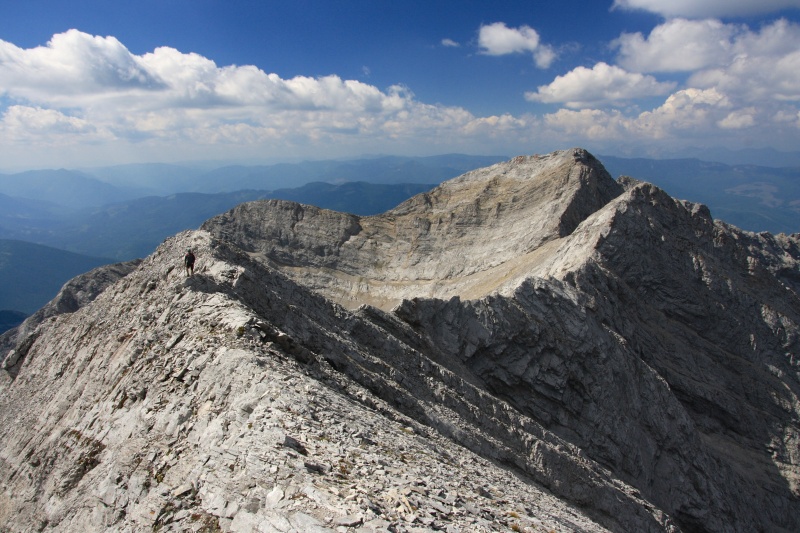 Looking back at Jeff as he makes his way along the ridge. 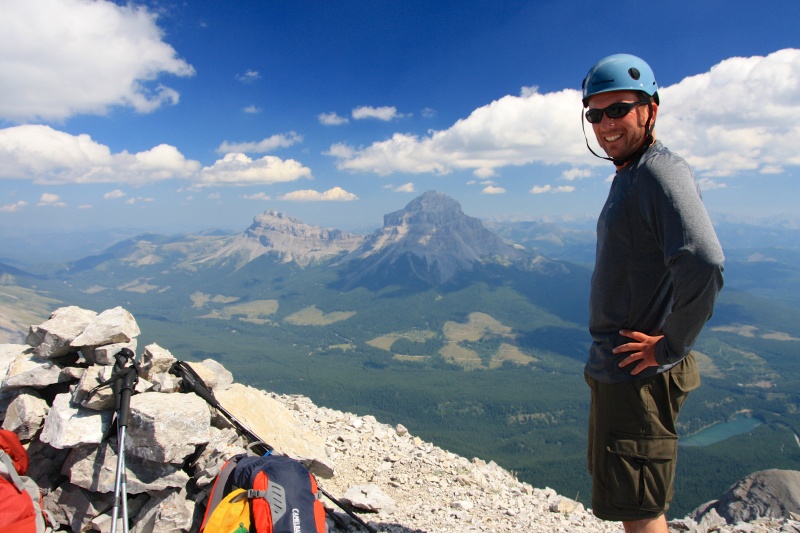 Jeff on the summit of Mount Tecumseh.  Crowsnest Mountain and the Seven Sisters are in the background. 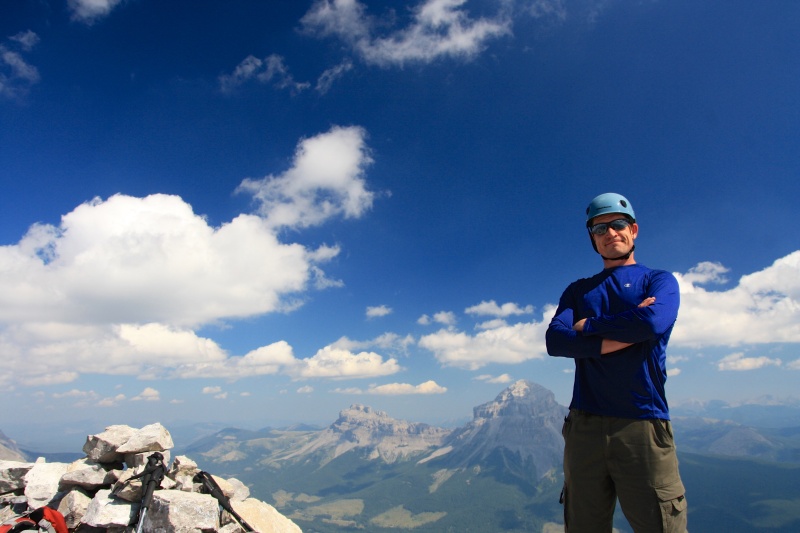 One day I will hike my gorilla costume to the summit of a mountain… for now though, my natural primate appearance will have to do.

The view from the summit to the northeast.  Crowsnest Mountain and the Seven Sisters are in the centre.  Allison Lake is visible on the bottom right and “Deadman Peak” and Allison Peak are on the left.

A telephoto of Crowsnest Mountain and the Seven Sisters.

Looking south from the summit.  Sentry Mountain sits alongside Highway 3 and Crowsnest Lake.  Mount Coulthard, Chinook Peak, Mount McLaren, Mount Ptolemy, the North Ridge of Ptolemy, and Andy Good Peak highlight the Flathead Range.  Island Ridge, Tent Mountain, and Loop Ridge are in the distance on the right.  The massive communications tower that sits on the summit of Crowsnest Ridge can be seen in the foreground to the right of centre.

The view to the west.  Phillipps Peak is on the far left with Mount Erickson is in the distant centre.  The summits of “Shooting Star Peak” and “Alexander Creek Mountain” are in the foreground to the right of centre. 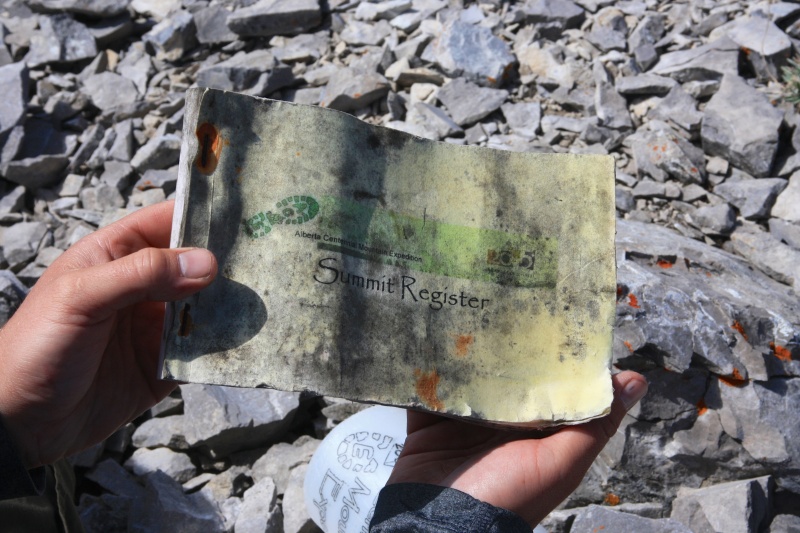 Unfortunately the summit register was a soggy mess.  A small hole in the top of the original canister had allowed water to enter and thoroughly soak the register.  We wrote our names on some loose pieces of paper that we had with us and placed these inside the container.  We then placed the canister upside down within the cairn to help prevent more water from entering.

The view down the north side of the summit ridge as we head back.  There is still a small patch of snow in the shadows.

To descend, we followed the ridge past our ascent point until we came to an orange patch of scree that was located next to the highpoint beneath Phillipps Peak.  From here we descended into the upper section of the cirque.  (Photo by Jeff Lang)

Looking down the cirque after descending from the ridge.  Our ascent route went up the shallow gully in the middle of the vegetation on the left.

Jeff listens for the ‘Call of the Wild’ while standing on top of a giant boulder that was located next to the ascent drainage.

Jeff navigates some smooth rock as we work our way back down the drainage.  This little pool of stagnant water was quite deep.

Contrary to appearances, I am not suffering from a hard night of partying 😉  To avoid some of the deep little pools of stagnant water, we had to brace our hands and feet against the canyon walls in order to shuffle past.  (Photo by Jeff Lang)

Here is a photo of Jeff as he negotiates past the same little water hole. 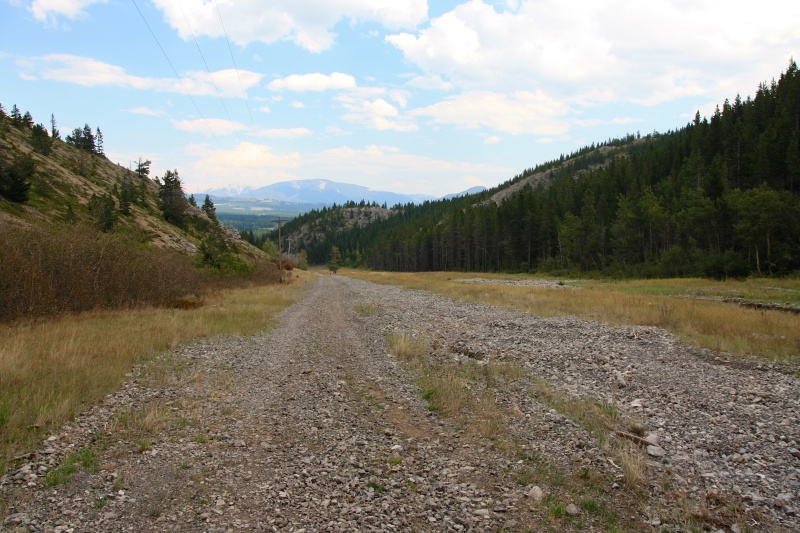 Looking east down the access road from Phillipps Pass.  We were really cursing the person who had stolen Jeff’s bike at this point.

A late afternoon view of Mount Tecumseh from our starting point in Sentinel.  This was yet another awesome scramble in the Crowsnest Pass!