EDIT:  I finally returned to complete Mount Taylor on 7 October 2017.  It was a great autumn hike!

Up for more adventure than what our original destination of Crowsnest Ridge could offer, Jeff and I made the last minute decision to forego the near certainty of reaching its summit in favour of exploring the slopes of Mount Taylor.  Driving the extra 20 minutes past the trailhead for Crowsnest Ridge proved to be worthwhile as we ended up enjoying some intense but excellent snowshoeing.  After ascending for 3.5 hours we found ourselves a mere 420m from the summit.  However, neither of us were comfortable with the snow conditions that covered the final 198 vertical metres, so we made the safe decision to turn around after reaching an elevation of 2042m.  Nevertheless, we were still treated to some excellent views and will return in a couple of months to complete the trip as a hike.

Mount Taylor is the northernmost peak of the Taylor Range and is situated a little over 5km to the north of the mining community of Corbin, B.C.. As a further point of reference, it is located directly to the west of Tent Mountain.  We accessed it via the Corbin Road turnoff which is ~8.6km west of the Alberta/B.C. border on Highway 3.  From the turnoff, we drove south on Corbin Road for 16.5km until we came to a small pullout beside a train bridge over Michel Creek.  This is where we parked.

I had initially thought about ascending the southern ridge and then enjoying the long ridge walk to the summit, but this would take too much time on snowshoes (though I think we will use this route when we come back to hike Mount Taylor in the spring).  Instead, we decided to try the most direct approach and ascend the western ridge directly beneath the summit.  This allowed us to avoid as much avalanche terrain as possible until we reached the section beneath the summit.  At just under 3km from vehicle to summit, this route is short but steep – especially in deep snow. 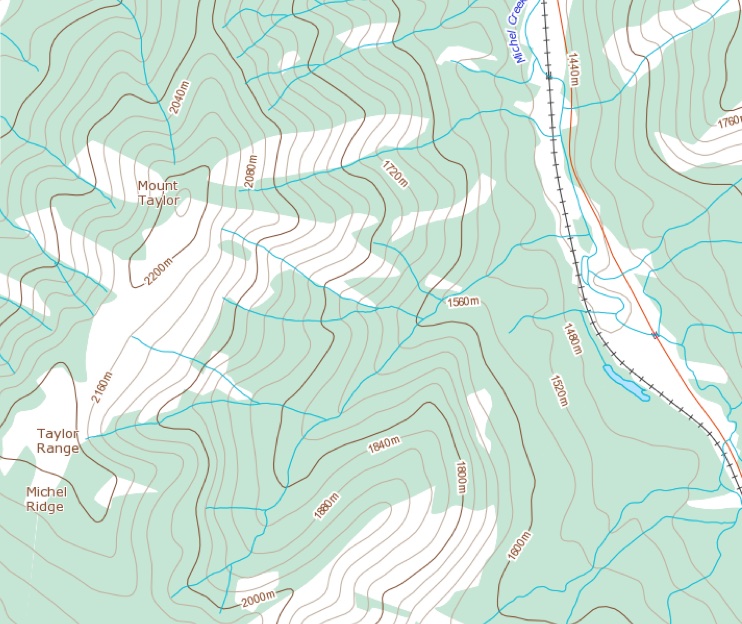 For fun, I thought I’d also include a topo map of Mount Taylor.

Our total distance travelled was 4.85km with total elevation gains of 614m.  Our total time was 5 hours and 7 minutes, though this would be considerably less without the snow.

Cloud cover obscures the summit as Jeff gears up at our parking spot alongside Michel Creek.  Our ascent drainage and ridge are on the left.

A more comprehensive view of our starting point.  The start of the southern ridge is the bump on the far left. 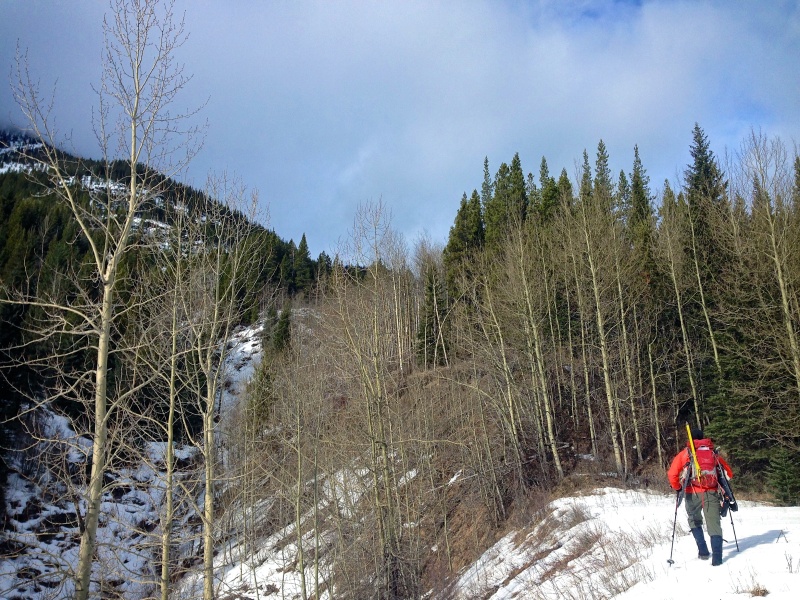 After using the bridge to cross Michel Creek, we headed south for a short distance before starting up the drainage.  A well trodden animal trail located on the north side (climber’s right) of the drainage eliminated the need for snowshoes.  (Photo by Jeff Lang)

The trail was easy to follow but icy sections meant that care was needed, especially during descent.

After ~450m the trail eventually disappeared beneath the snow. 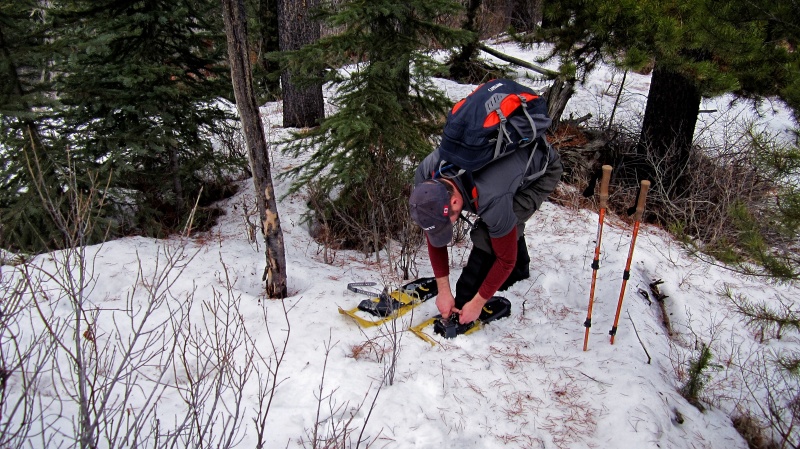 With the brief hiking portion of our trip now over, it was time to strap on the snowshoes.

For ease of travel, we entered the drainage shortly after losing track of the trail.  We only stayed in it for about 100m before heading onto the western ridge. (Photo by Jeff Lang)

Firm snow inside the drainage quickened our progress.

Jeff pauses to inspect a small icefall.  We bypassed this obstacle by heading into the trees on the left.  To avoid exposing ourselves to avalanche terrain in the upper sections of the drainage, we followed the left side of the drainage for only a short distance beyond the icefall before bushwhacking our way onto the ridge.

A more detailed view of the icefall.  If you look closely at the off-coloured ice on the right you will see what Jeff had paused to look at… a face that appears to be staring back!  Apparently Mount Taylor is also the abode of the dead… 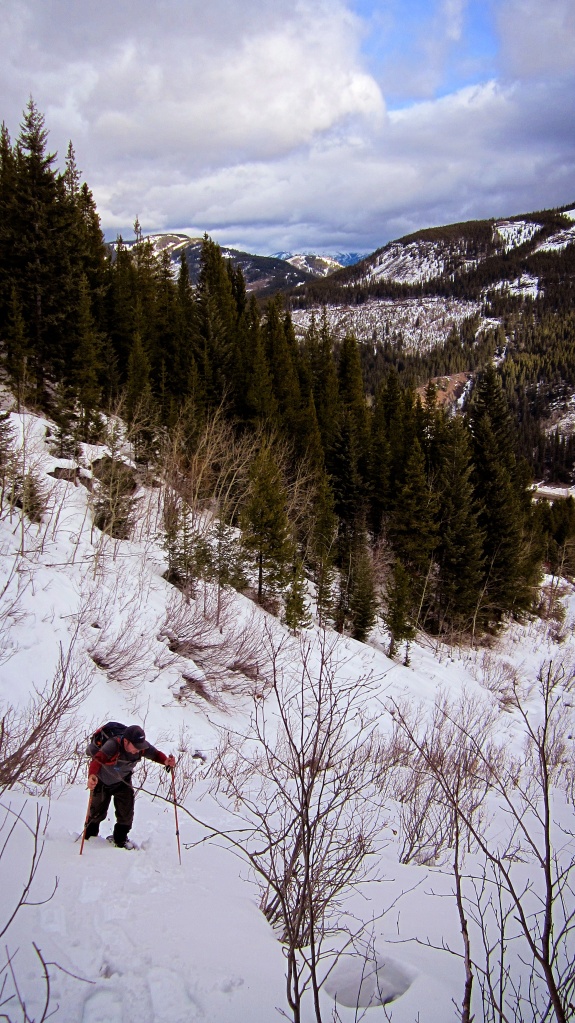 Jeff leaves the drainage as we bypass the icefall. 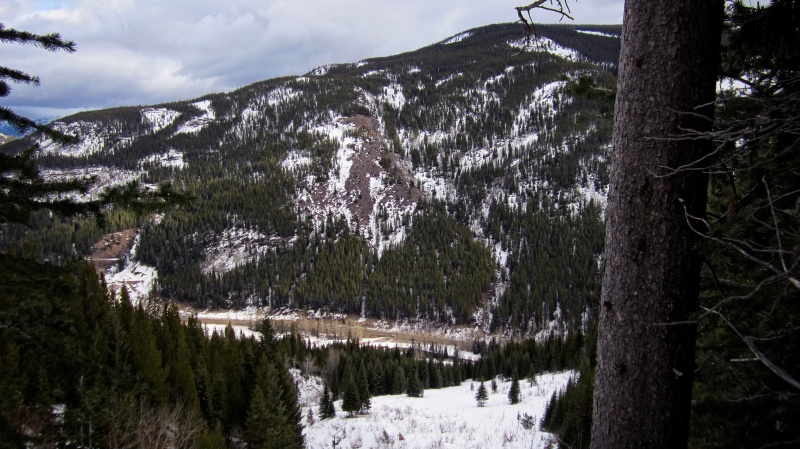 Looking back at our vehicle from above the icefall.  This is the point where we left the drainage to bushwhack our way onto the western ridge.

Jeff and I took turns breaking trail through the deep snow.

Jeff navigates under some low hanging branches as we switchback our way up the mountain. 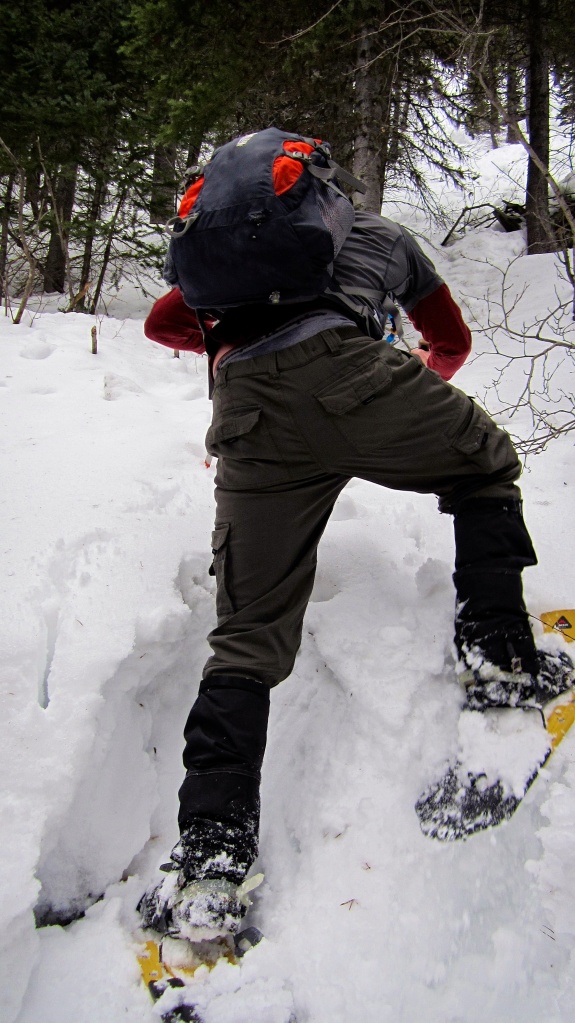 Why bother using a treadmill or stair machine at the gym?  All you really need is steep terrain and deep snow. 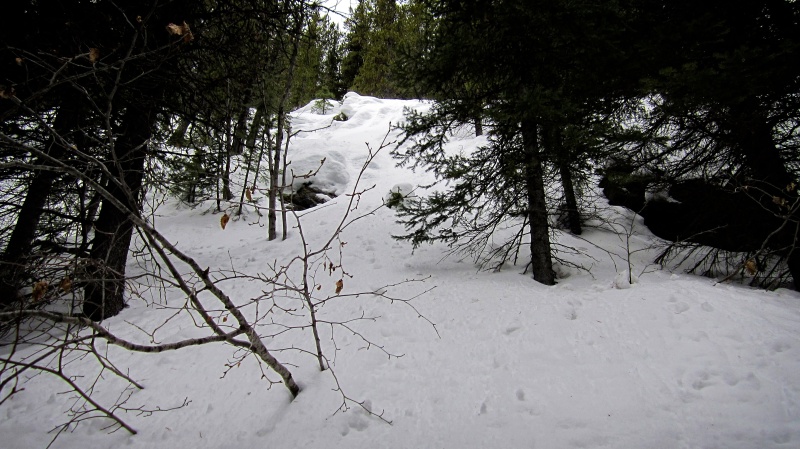 The snow made the woods frustratingly beautiful.

At times switchbacking was impossible and we were forced to kick step our way up. 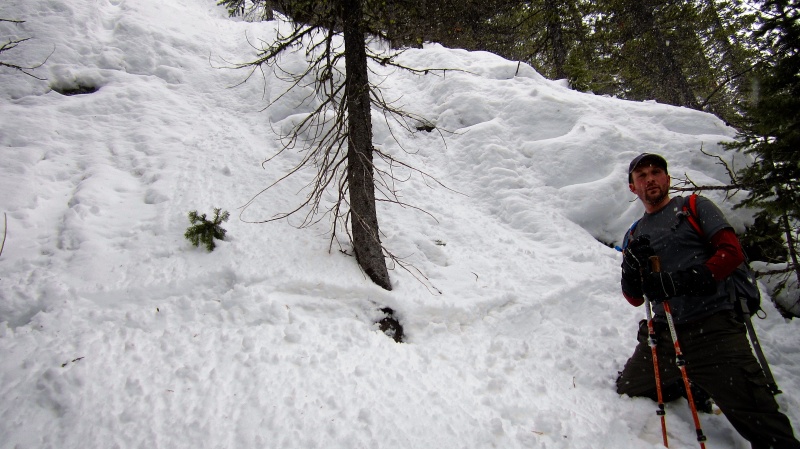 It took extra time and energy to navigate around obstacles such as this snow covered cliff band.  In the summer this would be a snap to overcome, but on this day it took almost 30 minutes to negotiate a bypass.

Once above the cliff band we found that the grade eased as we neared the ridge crest. 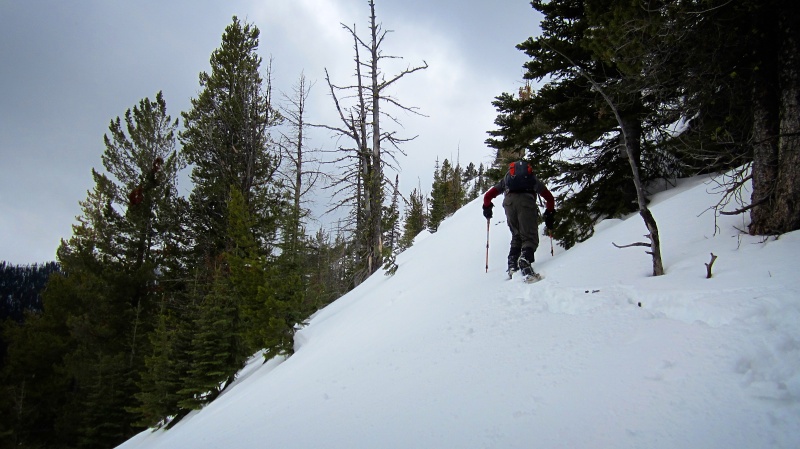 Skirting around some trees.

After what seemed like an eternity of bushwhacking, we were finally treated to our first views from the ridge.  In the foreground on the left is Tent Mountain and in the distant centre is the mining operation on Coal Mountain.  On the right is Michel Ridge.

Even though the grade had lessened, there were still obstacles to overcome.  I had to use this tree branch to pull myself up and over this large drift. (Photo by Jeff Lang)

Jeff searches for the easiest route along the ridge. 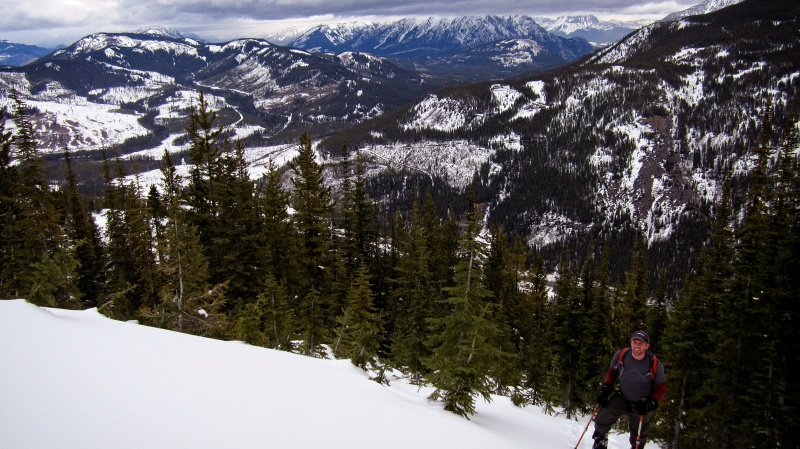 Looking to the northeast from the ridge.  Loop Ridge and Trail Hill are in the foreground on the left.  In the distance are Phillipps Peak, Mount Tecumseh, Island Ridge, and Crowsnest Mountain. 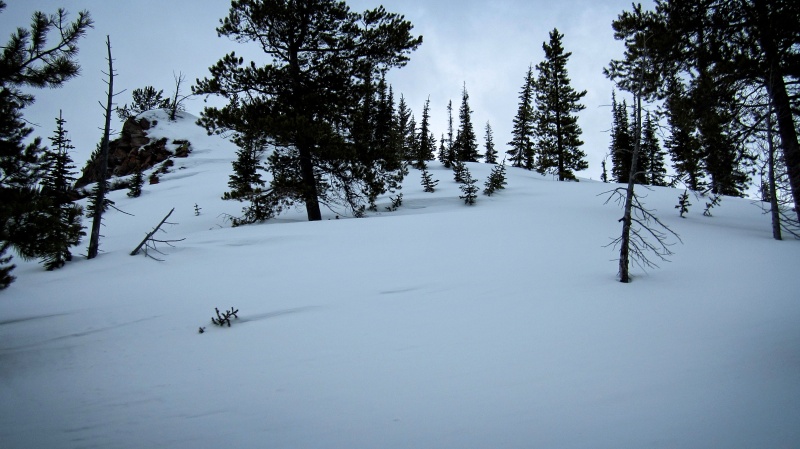 Wind packed snow on the open ridge was a welcome relief.

Jeff uses a small tree to brace himself as he crawls over the top of a deep drift.

Another view to northeast from further along the ridge.  Sentry Mountain is visible in the distance on the far right.  Only the lower portion of Mount Erickson is visible behind Loop Ridge on the far left.

Looking east across the valley at Tent Mountain. 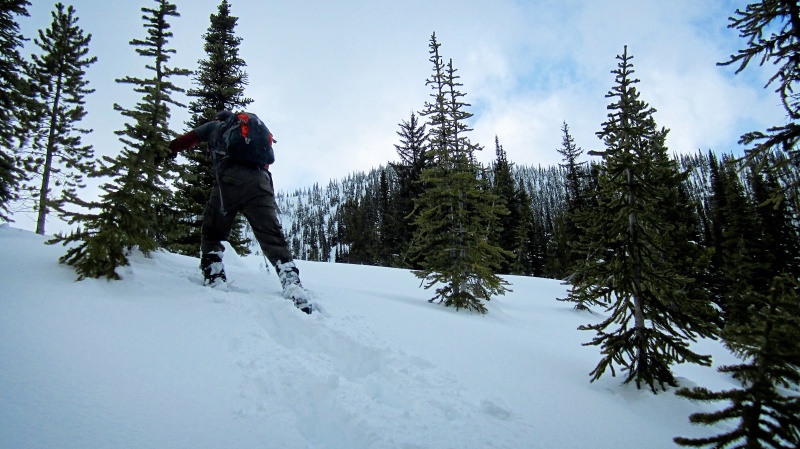 The summit finally came into view.

Jeff is all smiles as the summit of Mount Taylor is now only ~420m away.

However, after carefully studying the steep terrain beneath the summit (~198 vertical metres above the elevation where this picture was taken) we saw evidence of a small release.  With the depth of the snow necessitating long switchbacks for ascent, we weren’t confident in the safety of the situation.  Thus, it became apparent that we had no choice but to turn back.

To come this close to a summit and have to turn back is frustrating – and yet as a huge fan of life, I’m happy to err on the side of caution.  We will definitely return in a couple of months and tag this puppy.

The view to the southeast from the highest point that we reached (2042m).  The lower portion of Mount Ptolemy is visible in the distant centre. 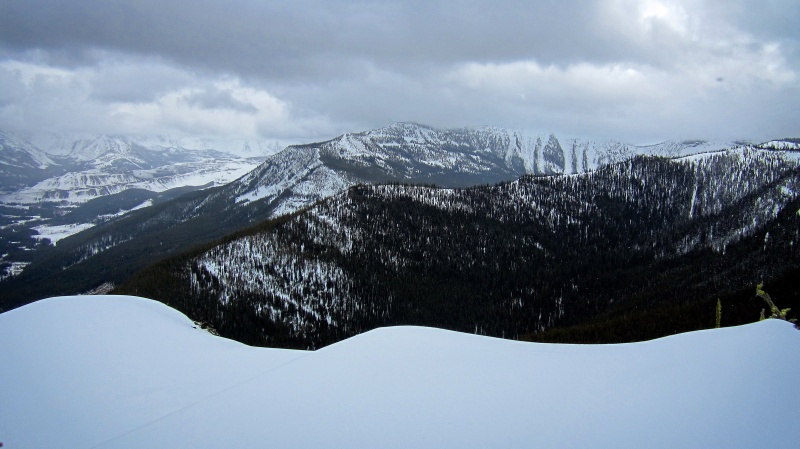 Looking south at Michel Head and the Michel Ridge.  In the foreground is the southern ridge of Mount Taylor.

Despite having to turn back just shy of the summit, it was still an awesome day to be on a mountain! (Photo by Jeff Lang) 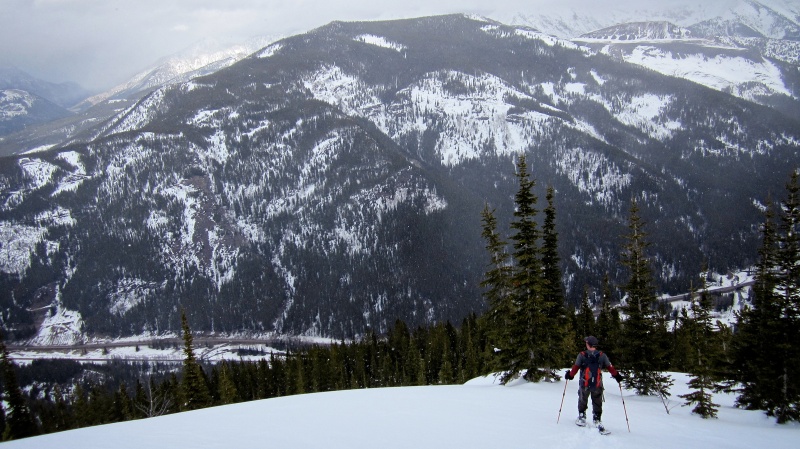 Tent Mountain provides the backdrop as Jeff makes his way down the ridge.

Our descent went quickly as we retraced our steps.  Loop Ridge is in the background.  (Photo by Jeff Lang)

On the way back I noticed that we had inadvertently created a snow danish.

Jeff navigates his way through the trees as he backtracks down the mountain. 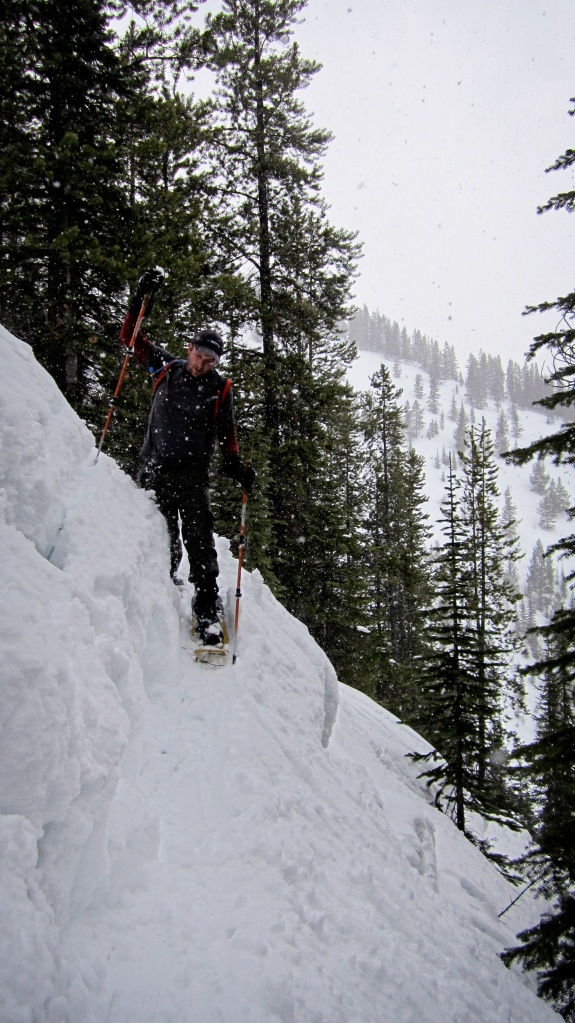 A tricky little traverse of the previously mentioned cliff band.

It’s a good thing that it’s not yet tick season. 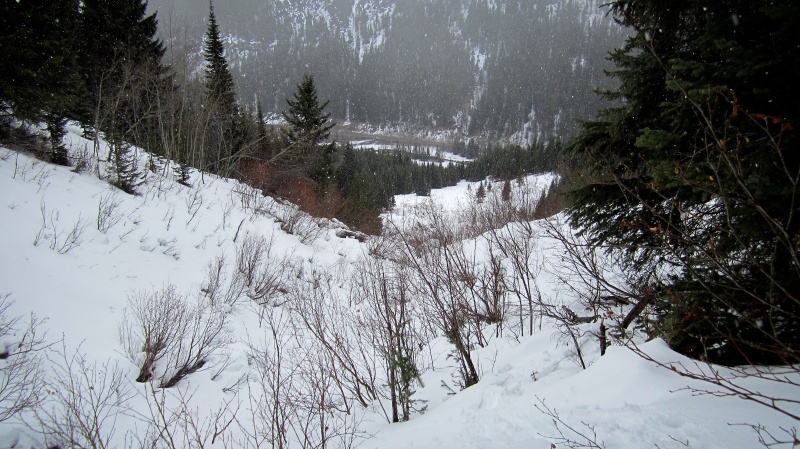 Back in the drainage just above the icefall. 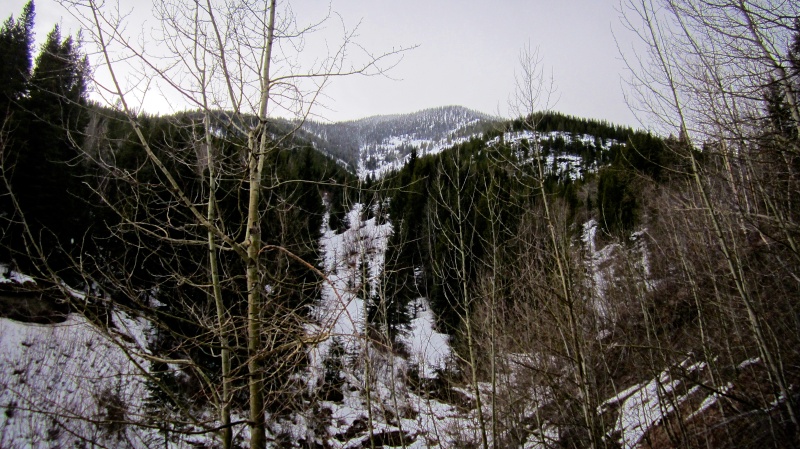 Looking back at Mount Taylor from the bottom of the drainage. 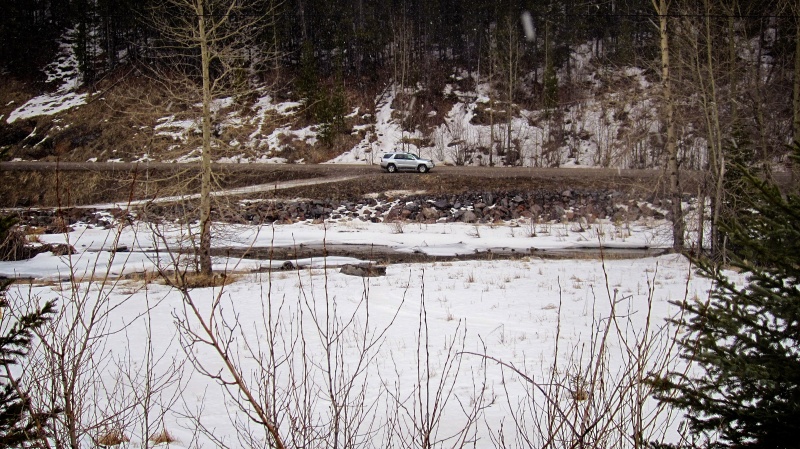 Arriving back at our vehicle after 5 hours and 7 minutes of snowshoeing fun.  Though we weren’t able to tag the summit, we did achieve some great views and make some great memories.  We will definitely be back to finish the job!

I had to include this picture from our drive back to Lethbridge.  This was taken shortly after passing through Brockett on Highway 3.  Even though it is February, thunderstorms can still take place.  Welcome to southern Alberta!