After stopping briefly on the summit of Mount Baldy, Jeff and I set off for the more impressive, Mount Albert that is located 1.68km to the east.  Happy to be off of the well trodden network of trails, we soon found ourselves in conditions that actually warranted the use of snowshoes.

From the summit of Mount Baldy we set off for Mount Albert thinking that this leg of journey would be mostly off trail.  However, though a connecting trail is not identified on the park map, we discovered that one actually does exist as indicated by numerous orange diamonds nailed onto trees.  Moreover, this trail does not appear to be as well used in the winter (at least on this day) and we often found ourselves searching for it in the deep snow or looking for glimpses of orange among the trees.  No worries though, as the route with or without the trail was fairly obvious and after 1.68km we found ourselves on the summit of Mount Albert.

The distance from Mount Baldy to Mount Albert was 1.68km.  The total distance for the loop of all 3 summits was 9.1km with total elevation gains of 572m.  It took us 4 hours and 12 minutes to complete it.  I’m not sure my GPS likes the winter as it showed us with a starting elevation of 1406m and a finishing elevation of 1367m – even though we ended up in the same location.  Regardless, the elevation for Mount Baldy and Mount Albert was still significantly higher on my GPS than on the Beauvais Lake trail map.

Jeff heads across an open meadow towards Mount Albert.

We were surprised to discover that a trail does exist between Mount Baldy and Mount Albert even though it is not indicated on the Beauvais Lake Provincial Park trail map.  Numerous orange diamonds served to keep us roughly on route even when we couldn’t make out the actual trail.

These aspen trees are twisted from constant exposure to the wind.

We followed the faint tracks of another snowshoer – or sasquatch 😉 – until they eventually disappeared.

Most of the time, the trail was invisible due to snow cover.  Following it required us to frequently scan the trees for orange diamonds.

Jeff makes his way up the trail.

The trail skirted along the north side of an intervening bump (behind Jeff) between Mount Baldy and Mount Albert.  This saved us from a needless elevation gain and loss.

The summit of Mount Albert from the trail. 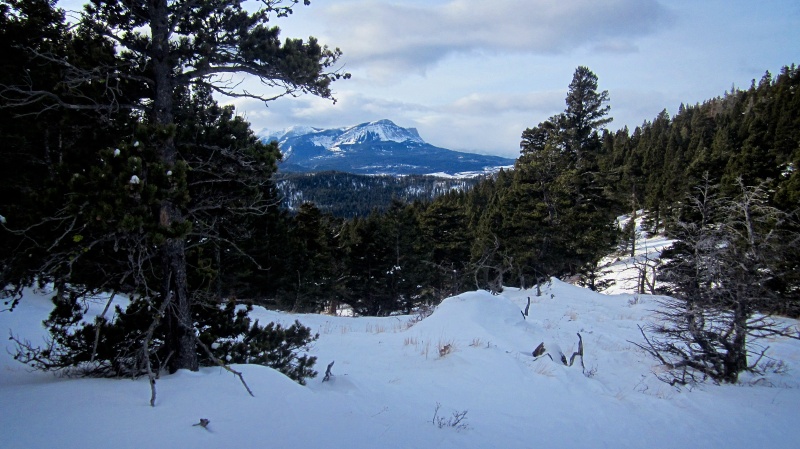 An opening in the trees allowed for a nice view of Table Mountain. 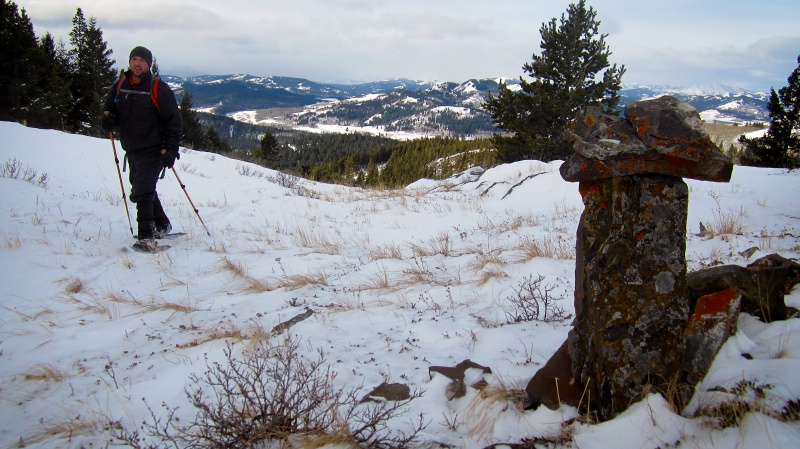 Jeff makes his way past a rather phallic-looking trail marker.

We’re on the right track…

Looking back at Mount Baldy (right of centre) from the slopes of Mount Albert.  The intervening bump in the centre is bypassed by the trail. 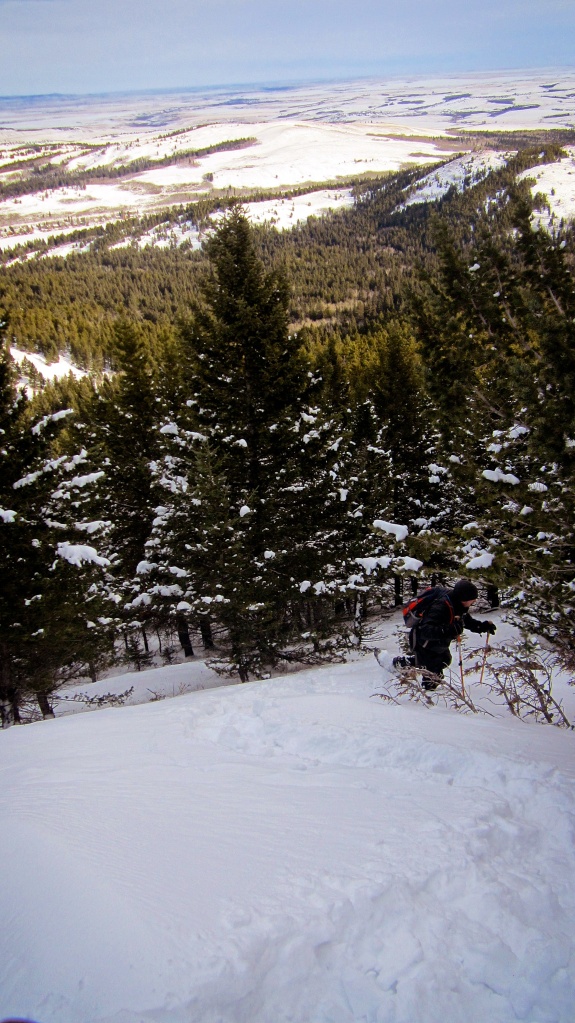 We encountered some deep snow beneath the summit.

The final jaunt to the summit is steeper than it looks.

Almost on the summit.  (Photo by Jeff Lang)

Looking back at Jeff from the summit.

Looking west from the summit.  The summit of Mount Baldy is in the foreground to the right of centre.  Blue Mountain is in the distant centre.

Looking north from the summit.  Just to the right of centre is our next destination for the day, Piney Point.  Ky-es-kaghd-oghsuyiss (the Porcupine Hills) is in the far distance.

Looking east from the summit.  Piney Point is on the left.  Christie Mine Ridge in the distant centre looks to be of similar height to Mount Albert.  Unfortunately, private land prevents access to the summit. 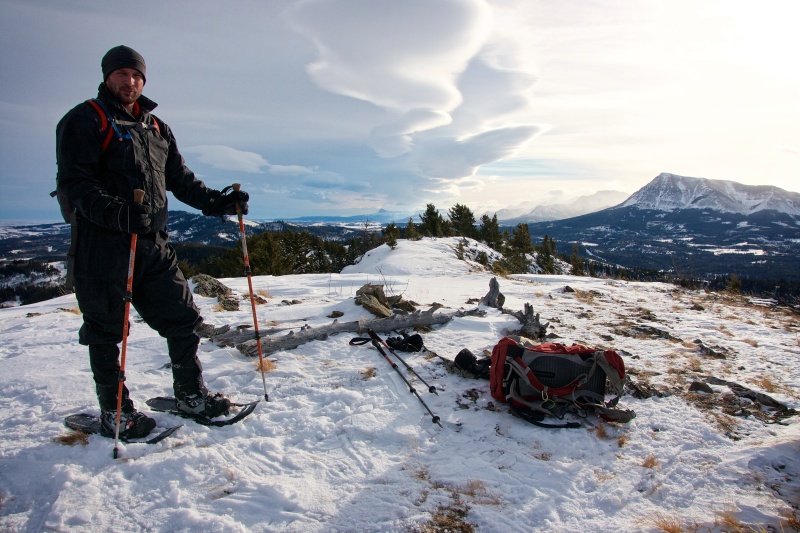 Jeff stands on the summit of mighty Mount Albert.

After 8 weeks of rehabbing an injury (with more to go), my body was glad to be active and outside once again.

Some ice fisherman try their luck on Beauvais Lake. 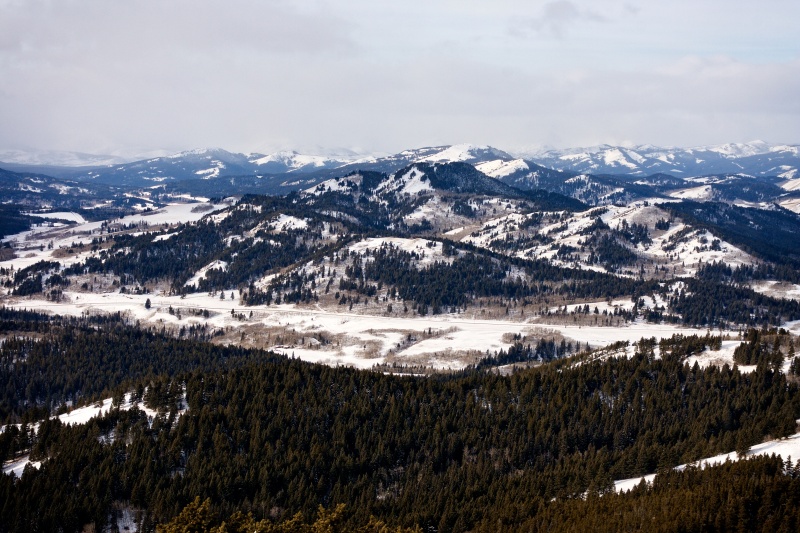 Looking west from the summit at Carbondale Hill, Maverick Hill, and Mount Backus (tallest bump in the centre). 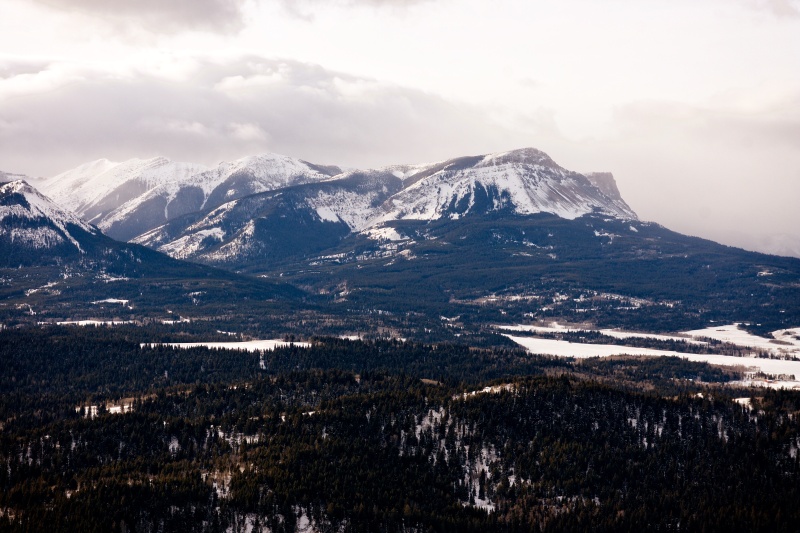 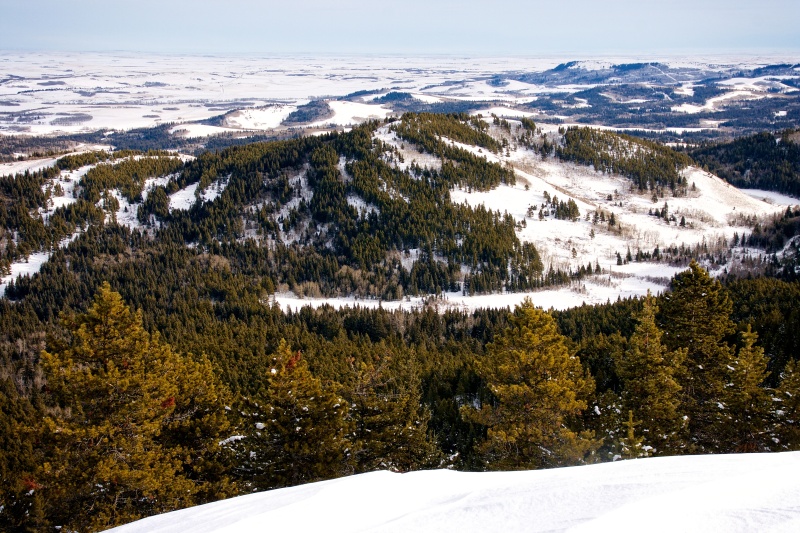 A closer look at Piney Point.  Our route went up the open slopes directly beneath the treed ‘summit’.

After enjoying the great views from Mount Albert, we set off for our third destination of the day, Piney Point.  Click to continue the trip report.